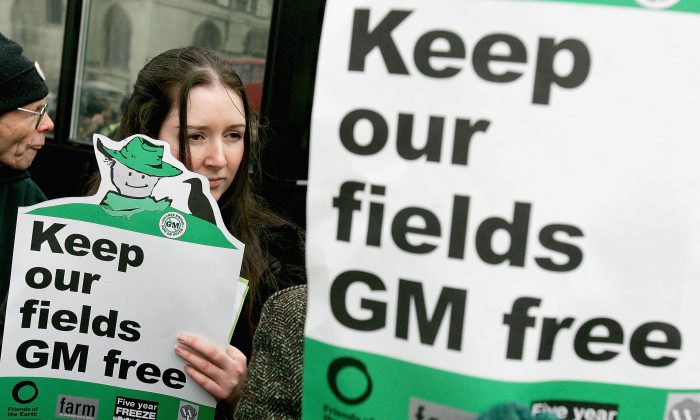 A woman from Friends of The Earth holds aloft a placard outside Parliament as part of a demonstration against GM crops in London England, Feb. 23, 2005. (Graeme Robertson/Getty Images)
GMOs and Biotech

GM foods were no longer marketable to the U.K. consumer.

More than two decades on, it is thought that the general public’s attitude towards genetically modified organisms (GMOs) has softened, but opinions are still divided.

Skeptics of genetic modification are concerned about the consequences of tampering with nature, and say the only beneficiaries are profit-driven manufacturers, such as biotech giant Monsanto. Supporters say GM crops have been consumed for years without consequence and they can help solve the global food crisis while using fewer chemicals.

Today, the U.K. government is supportive of GM technology, unlike the rest of the European continent.

U.K. Secretary of State for Environment, Food and Rural Affairs Owen Patterson expressed the positive potential of GMOs in a speech on June 20 at the Rothamsted Research facilities.

“The use of genetic modification could be as transformative as the original agricultural revolution,” he said. “The U.K. should be at the forefront of that, now, as it was then.”

“Europe risks being left behind. We cannot afford to let that happen” he said.

In April, supermarket giants Sainsbury’s, the Co-operative, and Marks & Spencer lifted their bans on GM-fed animal products, joining Asda, Morrisons and Tesco. These animal products do not need to be labeled as GM in the U.K., though all other products that contain more than 0.9 percent GM material must be labeled.

Waitrose is the only large-scale supermarket chain that has maintained a ban on products derived from GM-fed animals, such as meat, milk, and eggs.

Is GM Food Necessary in the UK?

GM crops are currently not grown commercially in the U.K. Most of the GM products that are imported to the U.K. are used for livestock feed.

According to the Food Standards Agency (FSA), 85 percent of manufactured feed in the European Union (EU) contains GMOs—that’s 107 million tons.

Stores that have recently switched to GM-fed animal products say it is becoming too difficult to find non-GM feed. Much of the feed is imported from Brazil and other places.

An FSA spokesman said: “The U.K., like many other parts of the EU, is reliant on imported commodities to feed our livestock, and GM varieties are very widely grown in exporting countries.”

Dr. Colin Ruscoe, chairman of the charitable organization British Crop Production Council (BCPC), said that GM foods have many benefits that have been over-shadowed by bad press in the ’80s and ’90s.

“It would increase agricultural production quickly [and] help tackle food security,” he said. He said the anti-GM sentiments in the U.K. are changing: “The tide is turning, albeit slowly.”

A sizable population remains against GMOs in the U.K. A worldwide day of action against GMO giant Monsanto took place May 25, 2013, under the banner “March Against Monsanto.” The London Occupy movement estimates a May 25 event drew about 1,000 in London, with 300 taking place in the march.

A public opinion poll for The Independent, conducted by ComRes and published July 23, shows 47 percent of respondents would support growing GM crops in the U.K.; 42 percent would be against it; 11 percent are unsure. ComRes surveyed 1,000 people.

Peter Melchett, policy director for the U.K.-based Soil Association, said no public demand exists for GMOs: “There is no one going to the supermarket asking: ‘where is my GM potato?’”

Dr. Brian John, a former geography lecturer at the University of Durham, now works with the Wales-based organization GM-Free Cymru. John agreed with Melchett’s view, adding: “The only beneficiaries are the biotech corporations. Farmers are caught in a gigantic corporate feudalism.”

Studies in the U.K. on the Health Effects of GM Food

One of the most influential health studies on GM food in the U.K. was conducted by Dr. Arpad Pusztai in 1998. His study showed that rats fed on GM potatoes suffered from immune system problems and stunted growth.

On a 150-second TV broadcast in 1998, the biochemist from the Rowett Research Institute in Scotland said of GM food: “I find it’s very unfair to use our fellow citizens as guinea pigs. … If I had the choice, I would certainly not eat it.”

Dr. Pusztai was sacked from his job a few days later. Critics say his study was unreliable; nevertheless, it had a huge impact on the U.K. public, and added to the explosive global debate on GM foods.

Current health studies in the U.K. are mostly conducted on developing GM foods rather than GM foods that are already on the market.

For example, Professor Cathie Martin at the John Innes Centre bioscience institute in Norfolk recently developed a purple GM tomato that has been found to prolong the lives of cancer-prone mice and double the shelf life of tomatoes, all while maintaining a full flavor.

With regards to the safety of GM foods already on the market, the FSA spokesman said: “All GM food and feed materials are rigorously evaluated before they can be authorized for use in the EU.”

“These evaluations are carried out centrally by the European Food Safety Authority [EFSA], on behalf of all EU member states, and we do not duplicate these assessments here in the U.K,” he said.

But Pete Riley, campaign director for GM Freeze is not so sure.

“There is no appetite for the EFRA or FSA to investigate if low levels of GM on a long-term basis could be harmful,” he said. Independent researchers have found problems with genetic modification, while industry studies show no problems with it, Riley said.

He added that a study showing the safety of GM maize (strains named NK 603, MON 810, and MON 863) that is already present in food and animal feed, was reanalyzed by the Committee for Research and Independent Information on Genetic Engineering (CRIIGEN) at the University of Caen. The reanalysis showed signs of potential problems with GM.

Riley said, “There are still serious question marks about the safety of these [GM] crops in the food chain.”