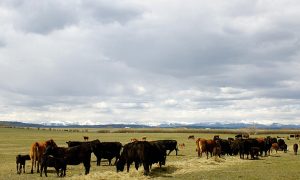 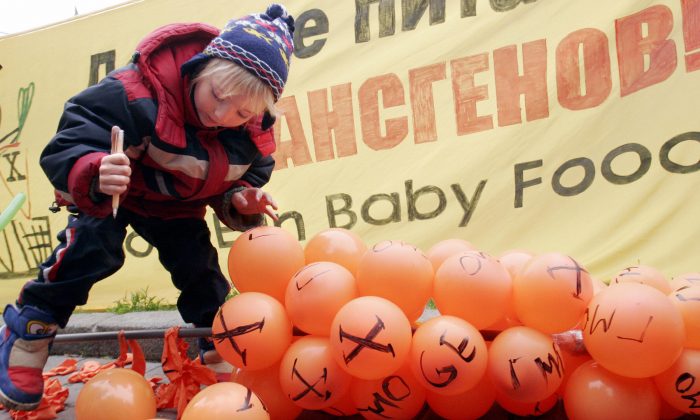 A little boy symbolically pops balloons with GMO (genetically modified organisms) inscriptions on them during a protest against the genetically modified additives in baby food in front of the Russian Health Ministry building in Moscow on June 1, 2006. (Mikhail Pochuev/AFP/Getty Images)
Europe

PYATIGORSK, Russia—Since 2007, the Russian government has required that foods containing more than 0.9 percent genetically modified (GM) material be labeled, but due to lack of implemented controls, many GM foods are unlabeled.

Genetically modified organisms (GMOs) first appeared on the Russian market in the 1990s. Currently, 17 strains of genetically modified crops—including types of maize, soy, potatoes, rice, and beets—are allowed as imports in Russia. Other varieties not permitted are nonetheless often included in many food products entering the country.

GM components are found in bakery products, and meat and dairy products. Anti-GMO activists are particularly concerned about the presence of GMOs in infant food. The most common additive is GM soy resistant to the herbicide Roundup.

The government commission charged with assessing the safety of GM crops has not approved any GM crops as safe. As a result, cultivation of GMOs is officially banned in Russia. In practice, however, there is a concern that GM crops may be grown in the country, as rigorous controls are not in place to check crops.

Is GM Food Necessary in Russia?

A chief inspector at Rospotrebnadzor (the Federal Service for Supervision of Consumer Rights Protection and Human Well-Being), Gennady Onishchenko, spoke about GMOs at the Nevsky International Ecological Congress on May 21, 2013.

He said that biotechnology, including genetic modification, is necessary to ensure the world’s population has quality food in a sufficient quantity. GM crops are often made to resist pests, inclement weather, and other factors that impact crop health.

A month later, at a meeting of the Federation Council, Onishchenko said he considers GM products a scientific achievement, but he recognizes the risks involved in their use.

“[GMOs] are a great achievement, this cannot be denied,” he said. “But we need to understand that the risks in the use of genetic modification technologies, … deliberate and unintentional, cannot be excluded. For this reason, from the very beginning [when joining the World Trade Organization] we started to build a system of control on GMO safety. … We initially set higher standards for ourselves in scientific analysis,” Onishchenko said.

Elena Sharoykina, director of the National Association for Genetic Security (NAGS), does not agree with the tactics of GMO development in Russia.

Russian scientists still have serious questions about the safety of GMOs, even as GMOs are permitted to enter the country, she said at a press conference announcing the results of research conducted by the A.N. Severtsov Institute of Ecology and Evolution of the Russian Academy of Sciences.

“Why do authorities not have doubts about allowing 17 strains that have not been fully investigated in Russia?” she asked. “We found GMOs in foods that had no labeling to show they contain GMOs,” she said.

Studies in Russia on the Health Effects of GM Food

In 2005, biologist Irina Ermakova began researching the impact of a variety of GM soy on the health of rats and their offspring.

Rats fed with GM soy showed negative physiological effects, including decreased fertility and higher mortality rates among offspring. Her work was contested by several scientists in her field when she publicized it in 2007. It has been cited, however, in the peer-reviewed publication The Open Nutraceuticals Journal.

Irina Ermakova is a vocal advocate of further studying the impacts of GMOs in Russia.

In 2010, A.N. Severtsov Institute of Ecology and Evolution at the Russian Academy of Sciences, upon the request of the National Association for Genetic Security, conducted an independent study on the impact of soybean meal containing GMOs on mammals.

Hamsters were fed the GM soy meal, which is widely used to feed livestock. Hamsters of the third generation had a high infertility rate.