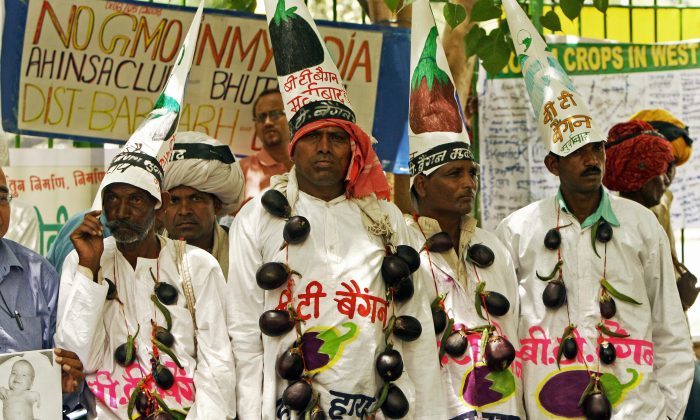 BANGALORE, India—Farmer suicides are too common in India. Some say the rise of genetically modified crops is to blame.

Shiva spoke of Bt-cotton, a GM strain of cotton sold by biotech giant Monsanto: “95 percent of the cotton seed is now owned and controlled by Monsanto. As most cotton seed companies are locked into licensing arrangements with Monsanto, the price of seeds jumped 8,000 percent.”

Farmer suicides have been concentrated in India’s western, cotton-growing regions.

These suicides have been a major driving force in India’s mass GMO protests.

On August 8, more than 1,000 farmers from 20 states gathered in the capital to demand a ban on GMOs. The protest gained momentum and significance because August 8 is celebrated as the day Indian masses rose up against the British colonial power in 1942.

On August 15, farmers presented their prime minister with an Indian flag woven of organic cotton to celebrate Independence Day.

The government has taken some steps to regulate GMOs.

In August 2012, the Parliamentary Standing Committee on Agriculture released a 492-page report and asked for the banning of GM food crops in the country. In October 2012, the technical expert committee (TEC) appointed by the Supreme Court recommended a ten-year moratorium on field trials for GMOs in India, to consider their impacts on health, the environment, the economy, and more.

Nonetheless, some 71 varieties of GMO crops are grown in trial fields in India, according to Reset, a German nonprofit sustainable development consultant.

GM cotton was introduced in the country in 2002. In 2009, Bt-Brinjal (a GM eggplant) got clearance—the first edible GM crop to enter India. The eggplant was placed under moratorium in 2010, however, due to protest and concerns about unknown health impacts.

Early this year, the Indian government made GMO labeling mandatory.

“We had to fight a case in the Supreme Court to demand the labeling,” Shiva said.

While GMOs stir up mass protest in India, some claim GM crops can speed the country’s development by increasing crop yields.

The Department of Agricultural Economics and Rural Development at Georg-August-University of Goettingen, Germany, surveyed 533 farm households in four cotton-producing Indian states from 2002–2008.

It found that Bt-cotton benefited small-scale farmers. Cotton yields increased by 24 percent, and profits increased by 50 percent on average.

On the contrary, Shiva said she has seen few of the purported benefits and many additional costs and debt. Her research foundation has monitored GMO-related activities since 1997 and has led a campaign against GMOs nationally and internationally.

“The seed fails to control pests, more pests have emerged, and more pesticides have to be sprayed,” explained Shiva. “The combination of high cost, nonrenewable seeds, and costly pesticides has trapped farmers in debt. This debt trap has pushed farmers to suicide,” she added.

Shiva said: “GMOs are not needed in India. The technical expert group of the Supreme Court recognizes it, the parliamentary committee on agriculture recognizes it, and the experience with Bt-cotton shows it.”

Monsanto has tried to patent not only a variety of wheat, but also the uses of the wheat—making rotis, breads, et cetera—according to Greenpeace, which cites the Biotechnology Regulatory Authority of India Bill (BRAI) 2013. Farmers unions and Greenpeace, outraged, successfully fought this move and the patent was revoked.

Shiva said: “If there are no patents, there will be no GMOs. The only reason companies like Monsanto push GMOs is because they can claim patents and collect royalties. Seed should be in farmers’ hands.”

Preparing for any negative impacts of GMOs, some Indian organizations have started seed conservation programs. Nongovernmental organizations Navdanya and Deccan Development Society, for example, speak with farmers about GMOs and educate them on the benefits and dangers.

In Vidharba—the eastern region of Maharashtra, where most farmer suicides occur—Shiva’s organization helps farmers with seed banks it has formed. The organization has 111 community seed banks around the country.

A bill was introduced in the lower house of the Indian Parliament on April 22 to create a regulatory authority for biotechnology. Greenpeace and other GMO-opponents say it is meant to muzzle protest.

Greenpeace states in a report that the Biotechnology Regulatory Authority of India (BRAI) bill makes no mention of “independent, long term bio-safety testing and assessments of GM crops.”