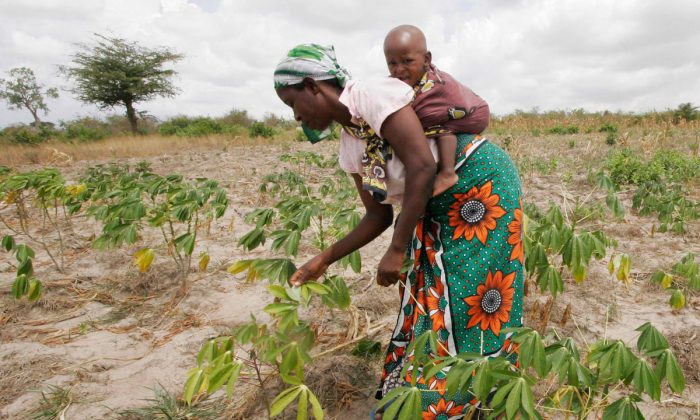 Naozua Chigamba collects cassava leaves in Mwanda Village in eastern Kenya in this 2009 file photo, after a drought hit many parts of the country a year prior. Genetically modified food has been allowed into Kenya during drought periods, but the country's Cabinet in late 2012 unilaterally banned all such food imports.(AP Photo/Khalil Senosi)
Africa

GMOs, A Global Debate: Kenya, Where GMOs Are Banned—For Now

When Kenya banned imports of genetically modified organisms, it was one of the most comprehensive moves against GM crops outside of Europe. Kenya has never permitted commercial cultivation of such organisms.

Many African countries, including Kenya, are more closely aligned with cautious Europe rather than with the United States when it comes to the globally contentious issue of genetically modified (GM) crops and foods.

Kenya’s cabinet, in a meeting chaired by former President Mwai Kibaki in November 2012, ordered the ban until the country is able to certify that genetically modified organisms (GMOs) have no negative health effects.

“The ban will remain in effect until there is sufficient information, data, and knowledge demonstrating that GMO foods are not a danger to public health,” reads a statement from the cabinet, according to SciDev.Net. The last move in Kenya related to GMOs was in 2009, when it became the fourth African country to sign a Biosafety Act, establishing a body to monitor GMOs in the country and legalizing the commercial cultivation of GMO crops. The act also paved the way for greater development of research fields for GMO crops.

Meanwhile, Romano Kiome, permanent secretary in the Ministry of Agriculture, told SciDev.Net that last year’s ban is illegitimate, because the biosafety authority must approve such a ban—the cabinet does not have the authority without such approval to implement the ban. But the ban appears to still be in effect.

Field trials of some crops—sweet potatoes, maize, a vaccine, and cotton—have been happening in Kenya since 1998. Further, researchers are prepared to start field trials of a GM banana variety in 2014 and are currently studying cassava, a new type of maize, and sorghum GM varieties.

Is GM Food Necessary in Kenya?

Outside of South Africa, African countries have been leery to get very involved with GMOs.

Kenya’s ban came after the release of a controversial study by French scientist Gilles-Eric Séralini that linked cancer in rats to consumption of GM foods. The study recommends that GMOs and related pesticides be evaluated in the long-term to measure toxic effects.

There is a “lack of sufficient information on the public health impact of [GM] foods,” said Kenya’s cabinet in a statement.

However, the cabinet chair at the time and some members have been replaced, and the ban could be lifted. “We hope the new cabinet will lift the ban,” said Dr. Willy Kiprotich Tonui, CEO of the National Biosafety Authority (NBA).

The authority has already addressed all safety concerns raised and says GMO foods are safe, Tonui told The Star, a Kenya-based media outlet. “We would like to inform the nation that any GM food that has been approved for use or transit in Kenya is safe and the public should rest assured that [the NBA] exists to protect them and to take care of consumer interests.”

The ban sent conflicting signals to the scientific community and other government agencies involved in regulation of the use of GMOs, said Dr. Gabriel Oluga Aboge, a lecturer at the University of Nairobi’s Department of Public Health, in an email. He has been involved with GMOs since 2003, for several years in Kenya as a trained regulator, for seven years as a researcher in Japan, and now back in Kenya.

Aboge, similar to a host of other scientists in the country, says the ban relies on insufficient information.

“I think that this ban should have been backed with sound, homegrown scientific data showing that GMOs are not safe,” he said. A general fear of GMOs among Kenyans of health risks associated with GMOs has been caused by contradicting positions taken by politicians, scientists, regulators and activists, said Aboge, as well as a lack of knowledge and scientific data on health and environmental risks associated with the use of GMOs.

GMOs are definitely necessary, he says: “I think Kenya and other African countries that have not adopted the GMO technology fully will need this technology.” He said the technology could bolster food security and help develop vaccines and medicine.

Peter Hobbs, an adjunct professor at Cornell University’s Department of Crop and Soil Sciences who has worked in Kenya and Zambia with conservation agriculture, and who teaches courses about traditional and international agriculture as well as GMOs, said in an email that the bans in both countries are purely political.

“You never hear about what the farmers would like. Instead the people arguing against [GMO cultivation] have an easy life style—many have no food issues and live in cities and have no idea how tedious it is to produce food by hand, weeding, and the risks of pest outbreaks,” he wrote. But neither ban will extend too far into the future, he said, because he is confident people will realize GMOs are safe to eat; people will become more supportive “and the whole issue will disappear.” At the same time, he said, there is a need for regulation.

The ban has been difficult to fully enforce. Some GMOs are still found in Kenya, in products such as the broiler chicken common in the fast food restaurants in Nairobi, according to the University of Nairobi, which highlights one of the fears of some Kenyans—that if GMOs are approved for commercial production in any capacity, it will be difficult for the country to regulate them and contain them.

“If countries like the U.S., with the latest biotechnology and well-trained personnel, still have challenges with genetically modified food, what of Kenya? We lack the technology, and even if we had it, it is likely to be obsolete,” Christopher Wanga, vice president of African Veterinary Association, told the Kenya-based Standard Digital in 2011.

Further, some advocates of the ban say that multi-national corporations, such as Monsanto, will quickly take a large piece of the agriculture industry if GM crops are allowed to be grown, pushing out the numerous small farmers in the country.

“The GM foods have a long-term impact on food security, biodiversity equilibrium, and the political landscape because the country would be dependent on Western biotechnology,” Kavaka Mukonyi, head of bio-prospecting at the Kenya Wildlife Service, told Standard Digital.

For instance, introducing GM maize “automatically creates a market for seeds for genetically modified foods,” he said. “What would stop agro-business firms from seeking to introduce their seeds in local agro-industry? Should we extinguish the human genome for the sake of GMOs?”

Kenyan officials have the capacity to enforce proper limits and oversight on any GM products once the ban is lifted, said Touri. A report by the United States Department of Agriculture (USDA), mostly deriding the ban (the department is pro-GMO), disagrees.

The USDA said the Kenyan government “has limited capacity, from personnel to testing facilities, to evaluate products.” SciDev.Net reports that as of late 2012, Kenya had only three biosafety officers, “and poor infrastructure and human capacity may make implementing the ban very challenging.”

Surveys on public perception of GMOs in Kenya are outdated, with none available from later than 2005. A more recent one by UK-based The Future Agricultures Consortium in 2010 of 140 “agro-dealers,” or middle men between seed companies and farmers, in two Kenyan counties found the dealers generally hesitant to deal in GM seeds, but open to the possibility.

While commercial production of genetically modified crops hasn’t started in Kenya, multiple trials of different crops have been underway since as early as 1998, including sorghum, maize, and cotton. Tonui, the CEO of the biosafety authority, said the authority hasn’t received any applications for GM commercialization of any of the crops being tested, though the Kenya Agricultural Research Institute plans on submitting an application sometime this year for a type of GM cotton that it has been testing.

Finally, genetically modified crops have been imported into Kenya during drought seasons, including in October 2011. Approval of these GM crops was granted after a food safety assessment by expert reviewers “concluded that the food products are as safe as the conventional counterparts,” said Touri. The imported crops are milled, meaning they can’t be planted.

The import sparked protests by hundreds of people in Nairobi, where farmer Gacheke Gachihi told the BBC that “The importation of GM maize is a ploy by leading millers to kill us—the small-scale farmer.”

John Mututho, chairman of the Kenyan parliament’s agriculture committee, said that Kenyans are “totally opposed to this toxic product.”

Studies in Kenya on the Health Effects of GMO Food

Though field trials have been happening since 2003, the Gilles-Eric Séralini experiment linking GMO consumption by rats to cancer took precedent over any research through the trials done in the country, none of which appears accessible online.

The biosafety authority and Kenya’s current presidential administration did not respond to emails from Epoch Times inquiring about GMO research and policies in Kenya.

Aboge, the lecturer at the University of Nairobi’s Department of Public Health, said that government agencies should work with universities and research institutes to get data on the safety of GM foods so they can make informed decisions.

When the ban was announced in late 2012, Miriam Kinyua, the former chair of the biosafety authority, told SciDev.Net that biotechnology research in the country would continue and that the ban could help intensify research, since the ban could be overturned with sufficient information about GMOs.