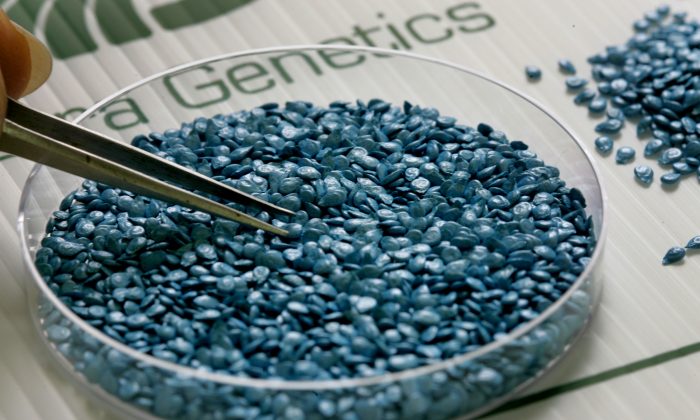 About 1,000 tiny seeds of hybrid cherry tomatoes, named Summer Sun and valued at about $1 each, are seen in a petrie dish as a Hazera Genetics laboratory worker sorts them at company headquarters in Berurim, central Israel, on Feb. 13, 2007. (David Silverman/Getty Images)
GMOs and Biotech

JERUSALEM—Israel is an international center for studying genetically modified organisms (GMOs), though GMOs may only be grown for research purposes and under many restrictions.

The sale and use of GM products is permitted, though they cannot be grown commercially in the country. GMOs are widely used in the pharmaceutical industry and, as in many other countries, more than 80 percent of soy and canola products, as well as baby formulas, include GM elements.

There are no requirements for labeling GMOs in Israel, so most Israeli consumers are not aware they are buying GM food.

Local and international environmental organizations are concerned about the lack of labeling and are actively lobbying for legislation in the Knesset (Israeli Parliament) to address the issue.

Agriculture research is very developed in Israel. Universities are widely involved in GM research projects financed by Israeli and international governments and foundations. The results of the research, however, cannot be tested on a large scale or implemented in Israel due to local restrictions on GMO crops. They inform tests abroad.

Israel’s Ministry of Agriculture regulates GMO research to stem contamination of non-GM crops. A detailed research plan must accompany any application for the experimental growth of GM plants and their associated microorganisms in the laboratory.

Dr. Yihiam Salts, who studies GMOs at the Agricultural Research Organization–Volcani Center (ARO), explained that GMO research can be conducted only in green houses or in open fields far away from agricultural areas.

Most of the research conducted on GM plants includes developing and improving plants’ resistance to pests, diseases, and herbicides. But the research can only reach the “proof of concept” stage, because of regulations.

As tomato cultivation spreads in Israel, researchers are developing tomato varieties resistant to viruses and without seeds, though this research won’t help local growers any time soon. Zeltz’s recent research involves merging genes to affect the amount of non-saturated fat in plants.

Many of the researchers in Israel are favorable toward GMOs.

The environmental movements in Israel against GMOs say GM seeds produce sterile crops, so cross-pollination with wild plants could bring rapid extinction to those wild varieties.

Israel has a diversified climate—from high, green mountains in the north to deserts in the south—and its flora is among the most diverse in the world.

“They need irrigation and fertilizers, and they will die in natural conditions, not like the wild plants that are strong enough to overcome even drought,” he said. Salts is not worried about cross-contamination, as he believes the wild strains will persevere.

The issue of whether products including GMOs are kosher or not is controversial not only in Israel, but also among Jewish communities around the world.

The question of kosher food among Jewish people concerns not only meat, but also vegetables.

The religious kashrut authority in Israel had ruled that genetic engineering “does not affect kosher status” because genetic material is “microscopic.”

But there are Jewish groups that dispute this decision and consider GMOs a violation of the biblical prohibition against “kilayim,” mixed breeding both in crops and in livestock.

Those believing GM products cannot be labeled kosher quote the well-respected 13th century Kabbalist Rabbi Moshe ben Nachman (known as “the Ramban”), who said mankind should not disturb the fundamental nature of creation.