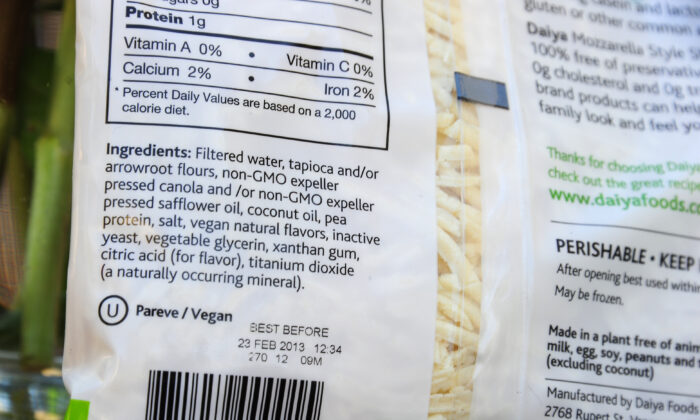 A package is seen in a grocery store in California in a file photograph. (Robyn Beck/AFP via Getty Images)
US News

Products in the United States containing genetically modified organisms (GMOs) will now be labeled as “bioengineered” under new food disclosure rules that took effect on Jan. 1, a change from being described as having “genetically engineered” or GMO components under the old rules.

Companies were given until Jan. 1 to comply with the new rules, which were finalized during the Trump administration. The government was following a law approved by Congress in 2016 to create a national standard for disclosing foods that are or may be bioengineered.

The countrywide standard “avoids a patchwork state-by-state system that could be confusing to consumers,” then-Agriculture Secretary Sonny Perdue said at the time.

The updated labeling requirements have drawn criticism, as well as a legal challenge from the Center for Food Safety, which claims that they’re confusing.

“These regulations are not about informing the public but rather designed to allow corporations to hide their use of genetically engineered ingredients from their customers,” Andrew Kimbrell, executive director of the center, said in a statement. “It is a regulatory scam, which we are seeking to rescind in federal court.”

The Organic Trade Association, the Institute for Agriculture and Trade Policy, and The Non-GMO Project are among the other opponents of the rule.

“Overall, many products containing GMOs will not be labeled, meaning that the absence of a bioengineered (BE) disclosure does not mean a product is non-GMO,” the project said in a statement when the rules were unveiled.

Congress, in the National Bioengineered Food Disclosure Law, ordered food manufacturers to place on labels text, a symbol, or a digital link such as a QR code if products have bioengineered ingredients. Lawmakers used the term bioengineered, but allowed the Department of Agriculture to use similar terms. However, the agency opted to stick with just bioengineered.

Supporters of the regulations include food industry groups such as the Food Marketing Institute and the Grocery Manufacturers Association.

“The rule provides a consistent way to provide transparency regarding the foods we sell and allow our customers across the country the means to learn more about grocery products containing bioengineered ingredients,” the institute stated in 2018.

However, even some supporters had urged the Biden administration to delay the compliance deadline in light of rampant supply chain issues.

The administration “must take a ‘do no harm’ position right now that allows companies to focus on delivering for consumers,” the Consumer Brands Association said in a recent statement.