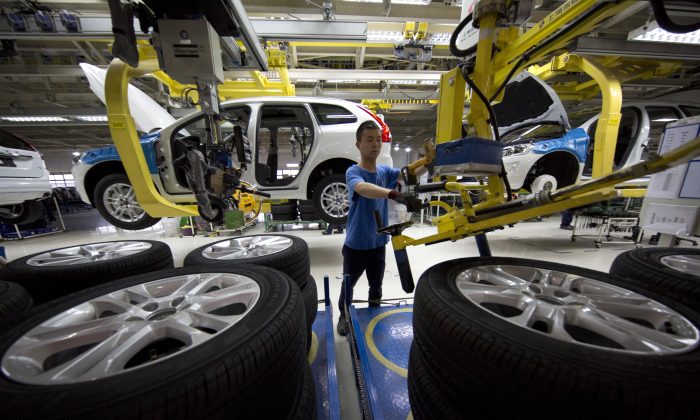 A worker installs wheels on a car at a Volvo factory in Chengdu in southwestern China's Sichuan province, on April 21, 2015. (AP Photo/Ng Han Guan)
China

The “Made in China” label has come to suggest products of inferior quality: cheap, disposable items that don’t last.

Over the years, Chinese factories and assembly lines have expanded their American exports from clothing and toys to more advanced electronics, such as personal computers and televisions. This year, Americans will be greeted by the first batch of Chinese-made cars.

While Chinese automakers have attempted to export China-branded vehicles to the United States in the past, those ideas never ventured beyond the boardroom. Businessman Malcolm Bricklin, who famously brought Subaru and Yugo cars to the United States, tried but failed to import Chinese Chery vehicles in the mid-2000s.

That’s about to change in 2016. China-owned, Sweden-based Volvo Car Corporation and Detroit-based General Motors Co. both plan to import cars made in China later this year.

Zhejiang Geely Holding Group Co. purchased a struggling Volvo from Ford Motor Co. in 2010 for $1.5 billion. It was the biggest acquisition of an automaker by a Chinese company.

Volvo will begin importing the S60 Inscription luxury sedan from China around summer 2016. The sedans will be produced by Volvo at its factory in Chengdu, capital of Sichuan Province, which began production of Volvos in 2013. Volume is expected to be low, around 1,500 in 2016, but will ramp up in future years.

The S60 Inscription will be marketed with a starting price of around $40,000. The variant imported from China is a long-wheelbase version of the S60 sedan, providing additional leg room for rear-seat passengers.

General Motors, the Detroit staple and America’s No. 1 automaker, plans to import the Buick Envision crossover SUV from China early this year.

GM doesn’t expect to import a large quantity at the beginning—between 30,000 and 40,000—a year, according to a Wall Street Journal report. The automaker also announced that it would import the plug-in-hybrid version of Cadillac’s new CT6 flagship from China to the United States.

Buick is GM’s most successful brand in China, and the company will use sales of Envision, which sits in the ever-popular crossover SUV segment, as a gauge for demand of Chinese-made cars.

The S60, CT6, and Envision will not be the first all-Chinese-made cars sold in North America by a major automaker. In 2012, Honda Motor Company began quietly importing Chinese-made subcompact Fit cars to Canada. Honda shifted production of the Fit from Japan to China to improve margins and avoid a strengthening yen currency.

Chinese import volume will be small for 2016 and should barely register in the minds of consumers. And these imports are from brands already well-established in the United States.

However, the decisions by GM and Volvo mark the beginning of a strategic shift for global automakers, and they represent an experiment that will be closely watched by other auto companies. Many of them are considering a similar move.

If sales go well—and they are expected to, given recent performance of the auto market—it could eventually pave the way for Chinese brands to expand more broadly in North America.

Fifty years ago, major brands such as Toyota, Honda, and Nissan were foreign to U.S. consumers. Small economy cars from Japan became popular after the oil crisis during the 1970s. A decade or two later, South Korea entered the U.S. market with Hyundai and Kia, which were initially plagued by quality and reliability problems. Those problems and the residual reputation impact took a few decades to resolve, but today Hyundai and Kia are well-entrenched brands in America.

Major Chinese national automakers like Great Wall Motor and Geely have a distinct advantage compared to the Asian automakers of yore. The Chinese Communist Party forces foreign automakers wishing to sell in China to form strategic joint ventures with local Chinese partners, which include technology transfers.

Today, Chinese automakers sell cars to South Asia, Africa, and the Middle East. So far, developed markets such as North America and Western Europe are barely touched by the Chinese.

While GM and Volvo have both committed to keeping the majority of production in their home countries, the industry will eventually see a slow but gradual shift in production to China.

In the long term, growth in demand for vehicles will come from emerging markets. Major U.S. and European automakers have already set up production in those markets such as Asia and the Middle East to meet such demand.

Unlike the sudden shift of entire production lines from the United States to Asia seen in the apparel and small-scale manufacturing sectors, any job shift in the automotive sector is likely to be a slow and gradual process. As global economic growth slows and the demand for vehicles dampens, production will likely be cut—albeit slowly—in the higher-cost markets first, while assembly plants in lower-cost markets such as Asia keep up their production.

Shades of this economic shift could be seen in GM’s decision to import the Buick Envision. Long among the top foreign automakers in China by volume, GM has generally allocated almost all of its local production to meeting China’s voracious demand for cars.

And as independent analysts believe China’s economic growth will slow significantly in 2016, it appears automakers are already looking for ways to export such excess capacity to foreign markets—10,000 cars at a time.