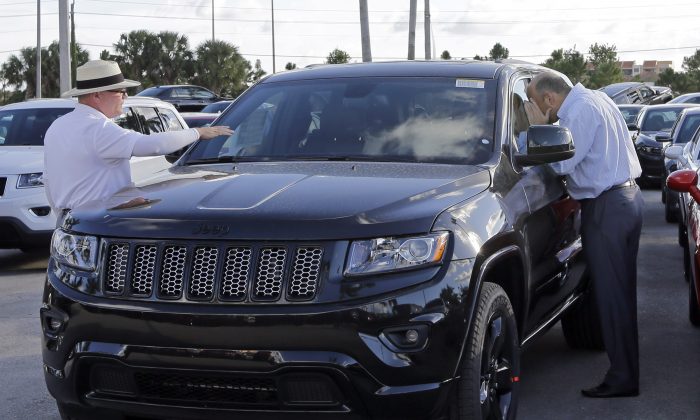 Salesperson Andrew Montalvo (L) talks to a customer checking out the interior of a 2015 Grand Cherokee Limited in Doral, Fla., on Nov. 5, 2015. Fiat Chrysler sales are up in what could be a record in November. (AP Photo/Alan Diaz)
Business & Economy

DETROIT—November used to be a slow month for U.S. car sales. Not anymore.

Black Friday promotions—some of which began well before Thanksgiving—pushed last month’s sales to a 14-year high of 1.3 million, just short of a record for the month. Sales were up 1.4 percent from last November, according to Autodata Corp.

November was a notoriously slow sales month until about five years ago, when car dealers joined other retailers in promoting Black Friday, according to Edmunds analyst Jessica Caldwell. Now, like Amazon, Wal-Mart and others, dealers start advertising Black Friday deals as early as Halloween. Jeep offered zero percent financing for up to 75 months. GM teased savings of up to 20 percent of for its Buick, Chevrolet and GMC brands. Hyundai offered an extra $500 on the Sonata sedan between Nov. 20 and Nov. 30.

Ford’s U.S. sales chief Mark LaNeve said sales got progressively stronger in November, and the last day of the month was one of the best this year.

Deals can be dangerous for the auto industry because they cut into profits and lower vehicles’ resale value. Incentives have been creeping upward since 2011; in November, they rose an estimated $172 over last year to $3,066 per vehicle, according to the car buying site TrueCar.com.

But Eric Lyman, vice president for industry insights at TrueCar, says the gradual increase isn’t a worrisome trend for the industry. For one thing, companies are making more profit per vehicle than they used to because they’re selling more expensive SUVs and trucks. The average sale price of a vehicle last month was $32,966, up 1 percent from the previous month.

Automakers are also trying to capture as many sales as they can in the boom years before sales inevitably slow. Rising interest rates, higher gas prices and other factors are all expected to stall auto sales sometime in the next few years.

“It’s kind of like, make hay while the sun shines,” Lyman said.