TIMELINES: The first official visit to Europe by a U.S. president was Dec. 13 of what year?
0
Share Now
TelegramFacebookTweetEmailTellMeWeReddit
Copy Link 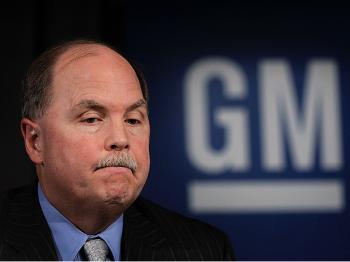 The revised restructuring plan was unveiled after the Obama Administration rejected GM’s first plan on Feb. 17, saying that it was not aggressive enough. The company had until end of this month to convince the federal government to grant more federal funding.

The plan would close an additional assembly plant in the United States.

"We are taking tough but necessary actions that are critical to GM's long-term viability," said GM chief executive Fritz Henderson in a company statement. "Our responsibility is clear—to secure GM's future—and we intend to succeed.”

GM will focus on building only four brands starting in 2010—Chevrolet, Cadillac, Buick, and GMC. During the past decade, the company has shed a slew of nameplates including Oldsmobile, Saab, Hummer, Saturn, and now Pontiac.

“At the same time, we also understand the impact these actions will have on our employees, dealers, unions, suppliers, shareholders, bondholders, and communities, and we will do whatever we can to mitigate the effects on the extended GM team,” Henderson said.

In the new plan, the U.S. Treasury would become 50 percent shareholder in the new GM. The United Auto Workers union would own 39 percent, and current bondholders get 10 percent ownership. The debt-to-equity swap is still in the proposal stages and is subject to bondholder approval.

If accepted, the U.S. Treasury would extend an additional $11.6 billion in emergency loans to GM, in addition to the $15.4 billion in loans already outstanding.

The Death of Pontiac

As late as last week, GM officials had vehemently denied that the company was axing Pontiac, calling the rumors of Pontiac’s demise “unfounded, unsubstantiated, and untrue.”

But action talks louder than words. GM had to quickly make deeper and more aggressive cuts to meet the government’s mandate on its viability loans.

The company’s discontinuation of Saturn and Hummer were foregone conclusions, but Pontiac’s future was unclear as the nameplate was a niche brand that had a strong following. The Pontiac G8, Solstice, and G6 models have been very well received by U.S. consumers.

The Pontiac brand was introduced in 1926 after its acquisition of Oakland Motor Car Co. of Pontiac, Michigan. The brand was known for its high-performance muscle cars during the 1960s and 1970s with its GTO and Firebird sports cars.

According to the Melbourne Herald Sun, ditching Pontiac would also cost GM’s Holden subsidiary more than $1 billion annually as the G8 shares its underlying structure with the Holden Commodore, a popular sedan sold in Australia. Holden is GM’s Australian subsidiary.

The new restructuring plan is also contingent upon GM completing a debt to equity swap with creditors, who hold a total of around $27 billion in unsecured GM bonds.

If GM and creditors cannot come to terms in swapping their bonds for a 10 percent ownership in the company, GM may be forced to restructure its debt in bankruptcy court.

GM is offering to exchange 225 commons shares for each $1,000 in face value of its outstanding bonds—around 40 cents on the dollar as of Friday’s stock market close. Ninety percent of its current bondholders must approve the measure.

So far, GM has said that “there is no assurance that any agreements will be reached on the terms,” according to a company statement.

With the deadline of June 1 quickly approaching, Wall Street analysts are already betting on GM entering bankruptcy. According to a report by Bloomberg, sources familiar with the panel that represents GM’s bondholders said that the debt swap under current terms is unlikely to succeed.

Credit rating agency Standard & Poor’s also said on Monday that they believe the bond exchange on terms proposed by GM might be difficult to accomplish.