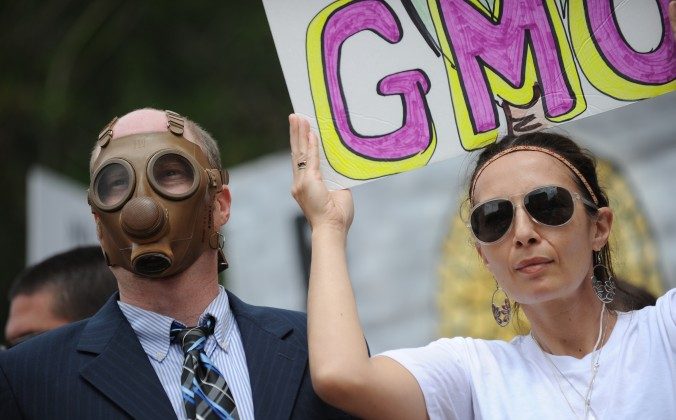 Protesters demonstrate against Monsanto in Los Angeles on May 25. A European coalition of scientists is challenging claims that the debate around genetically modified foods is settled and that GM foods are safe. (Robyn Beck/AFP/Getty Images)
12- OBSOLETE

In the wake of biotech giants Monsanto and Syngenta being awarded the World Food Prize, a European coalition of scientists is challenging claims that the debate around genetically modified foods is settled and that GM foods are safe.

The European Network of Scientists for Social and Environmental Responsibility, which consists of more than 90 scientists, academics, and physicians, released a statement Monday in response to “sweeping claims” that GM products are safe.

“We strongly reject claims by GM seed developers and some scientists, commentators, and journalists that there is a ‘scientific consensus’ on GMO safety and that the debate on this topic is ‘over,’” the group said in a statement.

“The claim encourages a climate of complacency that could lead to a lack of regulatory and scientific rigour and appropriate caution, potentially endangering the health of humans, animals, and the environment.”

The coalition cites several studies that suggest GM crops and foods can be toxic or allergenic, and raises the concern that many GM products remain under-tested.

Those who view GM foods as an answer to world hunger lauded the decision. Others, however, were outraged, saying the technology is overhyped, under-tested, and unsustainable. Critics also pointed to recent rulings in nine countries that have restricted or banned the field release or commercialization of certain GM crops.

The neutrality of the food prize itself was also questioned, as it relies on funding from corporate, private, and government contributions. Among its donors are Monsanto and the Syngenta Foundation.

“There’s a lot of money at stake if GM food safety is questioned, so we worry that important questions are being ignored,” said Lucy Sharratt, coordinator for the Canadian Biotechnology Action Network (CBAN), which has long opposed GMOs.

“Industry funding is undermining the integrity of science, and industry campaigns are eroding the public understanding of the scientific process.”

No Evidence of Harm: Monsanto

Monsanto maintains that its GM products are safe, and that seeds with genetically engineered traits have been tested more than any other crops “in the history of agriculture,” with no evidence of harm to humans or animals.

“We place the highest priority on the safety of our products and conduct rigorous and comprehensive testing on each,” said Trish Jordan, public and industry affairs director for Monsanto Canada.

“The science and safety behind genetic modification and other advanced breeding techniques are well-established and strongly supported by the scientific community.”

A 2011 study by researchers at the University of Sherbrooke in Quebec found that pregnant women who ate livestock fed with GM corn retained in their bodies and in their umbilical cords the toxic pesticides implanted in the corn through the genetic modification.

GM corn grown in Canada has been predominantly used for animal feed, processed-food ingredients, and biofuels. More recently however, GM sweet corn has made its way—unlabelled—onto store shelves.

Fifteen of the 43 samples purchased tested positive—meaning that approximately 35 percent of the samples were genetically modified. Samples from Sobeys and Walmart did not test positive.

“The high number of positive results in our small sample size alerts consumers to the fact that they could be unknowingly buying GM sweet corn. At the very least, GM sweet corn should be clearly labelled so consumers can make a choice,” said Sharratt.