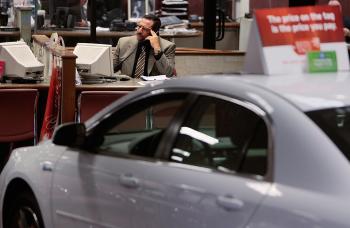 DEALER WOES: A car salesman works at his desk in a car showroom in New York City. U.S. automakers announced the closure of 988 dealerships in 2008. (Chris Hondros/Getty Images)
Business & Markets

According to reports, GM lost 401 dealers in 2008 to failures or consolidations, the most among the automakers. GM has about 6,375 dealers today. Ford saw 300 of its dealers shutter their windows and Chrysler lost 287 last year.

2008 was a tough year for U.S. automakers as high gas prices slowed sales of once-popular SUVs and pick up trucks, and a late credit market crunch prevented customers who wanted to purchase automobiles from obtaining auto loans.

Financial conditions were so perilous at GM and Chrysler that the companies needed a federal financial bailout—totaling $17.4 billion—to skirt bankruptcy.

“Last year will surely go down as a watershed year for our industry and for each one of us,” Annette Sykora, president of NADA, said during her remarks at the conference last weekend. “From $4-a-gallon gas prices and the dramatic shift in consumer demand to the ‘pins-and-needles’ anticipation of securing the bridge loans for the domestic automakers, we all saw and experienced things that were beyond our imagination,”

“What’s happening to the business I grew up in?” She asked.

Closing of dealerships affect a community’s local tax revenues, jobs, and for the manufacturer, lost sales and marketing/advertising power. An automaker’s most direct marketing connection with consumers is through its network of dealerships.

The bad news for automakers and dealerships is that the trend of disappearing auto dealers is expected to continue well into 2009.

In addition to the economic turmoil, much uncertainty hangs over some portfolio brands of U.S. automakers as they look to spin off or fold unprofitable businesses. Ford had already sold its Land Rover and Jaguar brands, and is currently reviewing its stake in Volvo Cars. GM announced last year that it was looking into making strategic changes with Saab, Hummer, and Saturn.

In a Jan. 21 report, consulting firm Grant Thornton LLP estimated that around 2,500 U.S. auto dealerships would close in 2009.

"The best dealers are true entrepreneurs and amazingly resilient, but they can't purely cost-cut their way to prosperity," Grant Thornton principle Paul Melville said in a statement. "New products and creative sales promotions by the automakers aren't stimulating enough demand, so it's time to consider stronger medicine."

The consulting firm also recommended actions that could stimulate growth in the auto industry, including “cash for clunkers” initiatives and expanding tax credits and lowering state sales taxes for automobiles.