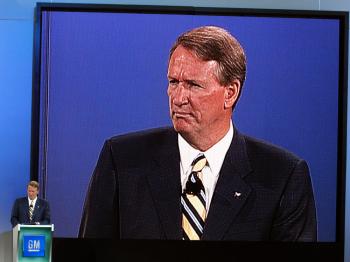 GM and Chrysler Closing In on Merger Deal?

The current economic environment has not been kind to U.S. automakers, and reports indicate that two of Detroit’s “Big Three” automakers—General Motors Corp. and Chrysler LLC—are engaged in advanced merger talks to stave off liquidity concerns.

Both companies declined to comment on merger discussions, citing that talks among automakers regarding future business strategies are standard practices. “GM officials routinely discuss issues of mutual interest with other automakers,” a GM statement said.

If nothing is done, a Standard & Poor’s report predicted that the “Big Three” automakers will run out of cash and be forced into bankruptcy by 2009. GM alone is burning $1 billion in cash per month in operational costs. The company lost almost $39 billion in 2007, and it reported $15.5 billion in losses during second quarter of 2008.

“While a GM-Chrysler tie-up would clearly be a high-risk transaction from an operational perspective, such a transaction may give GM leverage over two key stakeholders: the union and banks,” wrote JPMorgan analyst Himanshu Patel in a research report on Monday.

The need for consolidation was heightened as U.S. auto sales dropped 27 percent in September, the largest one month drop since 1991. Virtually every automaker posted sales declines: GM at 16 percent, Ford at 35 percent, Chrysler at 32 percent, and even Toyota saw a 32 percent decrease in September sales.

While combining GM and Chrysler’s operations will save money, its repercussions on Michigan’s local economy, the U.S. manufacturing sector, and dealerships across the country may be lasting.

Michigan already has one of the highest unemployment rates in the country, at 8.9 percent in August, according to Department of Labor data. And if the GM-Chrysler merger consummates, more job losses are inevitable.

"I personally would not want to see anything that would result in a consolidation that would mean the elimination of additional jobs," Gettelfinger said on the radio show.

But the job losses may be inevitable, given the current state of affairs in the U.S. manufacturing industry. Little by little, automakers have already shed salaried and hourly workers, offered voluntary buyouts, and enforced benefit cuts.

On Monday, GM told union officials at two factories that workers may no longer work unscheduled overtime, alluding to more aggressive cost cutting measures ahead. The directive was publicized by the Associated Press, and affects one plant in Michigan and another in Lordstown, Ohio. A GM spokesman disputed the accuracy of the report.

Last Friday, GM agreed to pay $1.6 billion into a union-managed healthcare trust for retirees and offered buyouts up to $140,000 to union members in one of its Ohio SUV assembly plants. The plant is scheduled to close by the end of this year.

As consumers shy away from showrooms, dealerships across the country also face uncertainty. A new study by Grand Thornton LLP says that an increasing number of U.S. dealerships will shut down starting this fall.

"An increasing number of dealers are simply closing their doors because sales have plummeted, credit has dried up, the overall retail environment is increasingly challenging and potential investors are sitting on the sidelines," said Paul Melville, a Grant Thornton partner, in a release.