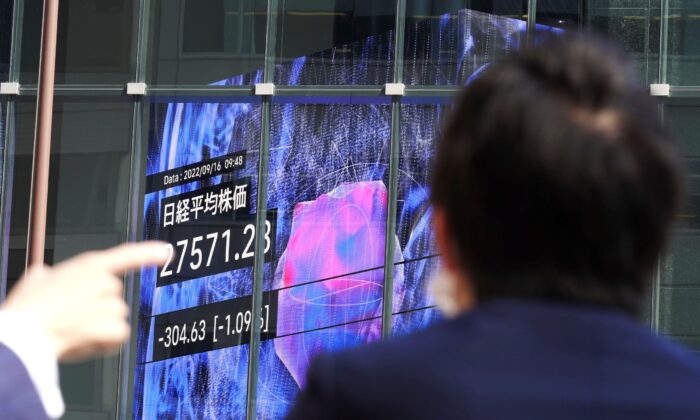 Wall Street’s decline indicates “no sign of relief for risk sentiments” while the job market data “provided the go-ahead for further tightening” in monetary policy, Yeap Jun Rong of IG said in a report.

On Wall Street, the S&P 500 future was down 0.9 percent. That for the Dow Jones Industrial Average was off 0.8 percent.

The S&P 500 sank Thursday after the Labor Department said applications for unemployment benefits last week fell to a four-month low.

The market benchmark is down 4.1 percent for the week following the biggest pullback in two years on Tuesday after the government reported U.S. consumer prices rose 8.3 percent from a year earlier and 0.1 percent compared with July.

The overall figure was down from June’s 9.1 percent peak. But core inflation, which strips out volatile food and energy prices to give a clearer picture of the trend, rose to 0.6 percent over the previous month, up from July’s 0.3 percent increase.

Traders worry rate hikes by the Federal Reserve and central banks in Europe and Asia to control price rises might derail global economic growth. Two of the Fed’s rate hikes this year have been by 0.75 percentage points, triple its usual margin. Traders expect a similar increase this month.

Fed chair Jerome Powell said in August that rates would stay elevated for some time until the U.S. central bank is sure inflation is under control.

The Dow fell 0.6 percent and the Nasdaq slid 1.4 percent.

In Asia, the Shanghai Composite index lost 2.3 percent to 3,126.39 after data showed Chinese consumer and factory activity improved in August but were still weak. Housing sales fell 30 percent from a year earlier under pressure from a government crackdown on debt.

Retail sales data gave a mixed view of how American consumers are coping with inflation. Sales rose by an unexpectedly strong 0.3 percent in August after falling 0.4 percent in July.