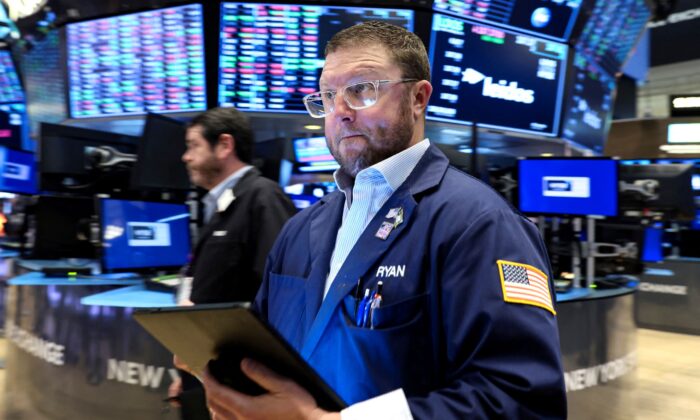 Traders work on the floor of the New York Stock Exchange in New York City, on March 30, 2022. (Brendan McDermid/Reuters)
Inflation

Global shares and Wall Street futures sank on Tuesday ahead of the much-anticipated release of March data on U.S. inflation, which economists expect to have picked up its pace and the White House warned would come in “extraordinarily” hot.

MSCI’s world equity index was at its lowest levels in nearly a month, while oil prices rose more than $3 a barrel and U.S. 10-year Treasury yields climbed to new highs above 2.80 percent, the highest in around four years.

Economists predict that the consumer price index (CPI), a measure of inflation, hit an annual 8.4 percent in the United States in March, up from 7.9 percent a month prior and a fresh 40-year high.

On a month-over-month basis, economists expect the rate of inflation in March accelerated to 1.2 percent versus February’s 0.8 percent.

“All eyes today are on the U.S. March CPI reading, expected to hit a new cycle high at 8.4 percent year-on-year,” ING analysts said in a note, adding that a reading “in that vicinity should maintain aggressive Fed tightening expectations and keep the dollar supported across the board.”

Seeking to tame runaway prices, the Federal Reserve has embarked on a tightening cycle, with ING analysts predicting that, by the end of the year, the benchmark interest rate will rise to around 2.5 percent.

The Fed raised rates by 0.25 percent at its most recent policy meeting in March, with expectations building for a 0.50 percent hike the next time policymakers convene at the beginning of May.

“I think that it will take some time to get inflation down,” Federal Reserve Bank of Cleveland President Loretta Mester said on CBS’ “Face the Nation” on April 10, citing rising energy and commodity prices.

“So I think inflation will remain above 2 percent this year and even next year, but the trajectory will be that it’ll be moving down.”

White House press secretary Jen Psaki told reporters at an April 11 briefing that the headline rate of U.S. inflation for March, which includes the volatile categories of energy and food, is expected to come in “extraordinarily elevated.”

“Since President [Vladimir] Putin’s military buildup accelerated in January, average gas prices are up more than 80 cents; most of the increase occurred in the month of March,” Psaki said, adding that in some cases, U.S. gasoline prices were more than a dollar above levels prior to Russia’s invasion of Ukraine.

She estimated that the “roughly 25 percent increase in gas prices will drive tomorrow’s inflation reading.”

Some economists have balked at blaming Putin’s actions in Ukraine for high prices in the United States, which started rising well before the invasion.

“Memo to Jen: No one in America believes inflation has anything to do with Putin. It was here before the war and will remain after. Stop treating people as if they were stupid,” economist Jim Rickards said in a Twitter post reacting to Psaki’s remarks.

The dynamic of high energy costs driving up the headline pace of inflation was evident in Germany’s inflation rate, which in March hit a 41-year high of 7.3 percent in annual terms, according to data released on Tuesday. Energy prices in Germany rose 39.5 percent year-over-year and 16.4 percent month-over-month in March, with Germany’s statistical agency describing the increase as “massive.”

Economists expect U.S. core inflation to come in at 6.6 percent year-over-year in March when the U.S. Department of Labor releases the data later on Tuesday, up from 6.4 percent a month prior.

The war in Ukraine has pushed up already high energy prices even further, while military activity in the Black Sea has disrupted food exports from the conflict-stricken country.

Republicans and conservative groups have blamed surging inflation in the United States on President Joe Biden’s policies, with Americans For Prosperity, a conservative advocacy group, recently launching a campaign blaming the highest rate of inflation in decades on “trillions of dollars in new spending that members of both parties have approved in recent years—coupled with antiquated regulations that stifle energy supply and economic growth.”

American consumers have also boosted their future inflation outlook. A survey released on Monday by the New York Federal Reserve showed that expectations for where inflation will be one year from now have risen to 6.6 percent in March. That’s the highest reading in the history of the data series, which dates back to 2013.