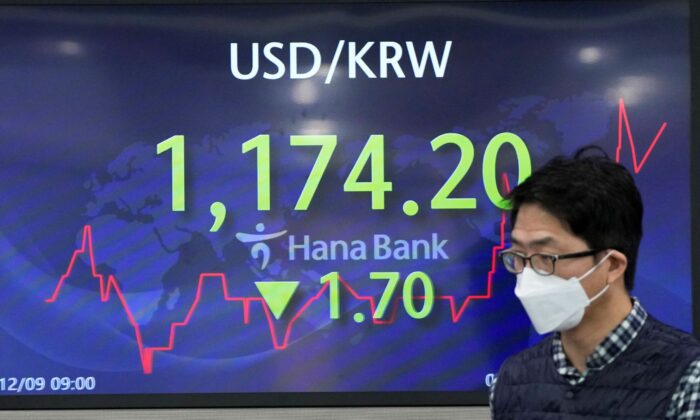 BEIJING—Global stocks were mostly higher Thursday as investors waited for U.S. inflation data that might influence the Federal Reserve’s decision on when to roll back economic stimulus.

Wall Street futures were lower after stocks rose for a third day Wednesday as anxiety about the coronavirus’s omicron variant eased.

Traders looked ahead to Friday’s U.S. inflation data for November for indications of whether the Fed might feel more pressure to cool prices by rolling back stimulus that is boosting stock prices.

Fed officials meet next week for the last time in 2021. They said earlier they were ready to act if needed after inflation hit a 30-year high of 6.2 percent in October.

“Friday’s inflation reading will undoubtedly be top of mind” for Fed officials, Matt Weller of StoneX Financial said in a report. The headline figure is “expected to rise even further.”

Also Thursday, China reported inflation in prices paid by factories for components and raw materials eased in November from the previous month’s 25-year high. That is seen by traders as a possible guide to U.S. inflation due to China’s role as a global manufacturing center.

On Wall Street, futures for the benchmark S&P 500 index and the Dow Jones Industrial Average were off 0.2 percent.

The Dow added 0.1 percent and the Nasdaq composite rose 0.6 percent.

In Asia, the Shanghai Composite Index 1 percent to 3,673.04 after producer price inflation eased to 12.9 percent over a year earlier from October’s 13.5 percent as prices of coal and metals fell.

“Efforts to tamp down energy prices appear to be working,” David Chao of Invesco said in a report. “It’s possible that producer prices and inflation could continue to moderate.”

India’s Sensex was little-changed at 58,646.60. New Zealand and Bangkok declined while Jakarta gained.

U.S. stocks slipped over the previous two weeks due to concern about inflation and the omicron variant. Stocks steadied after the chief White House medical adviser, Dr. Anthony Fauci, said Monday early signs suggest it might be less dangerous than the earlier delta variant.

In energy markets, benchmark U.S. crude lost 11 cents to $72.23 per barrel in electronic trading on the New York Mercantile Exchange. The contract rose 31 cents on Wednesday to $72.36. Brent crude, the price basis for international oils, declined 20 cents to $75.62 per barrel in London. It rose 38 cents to $75.82 the previous session.