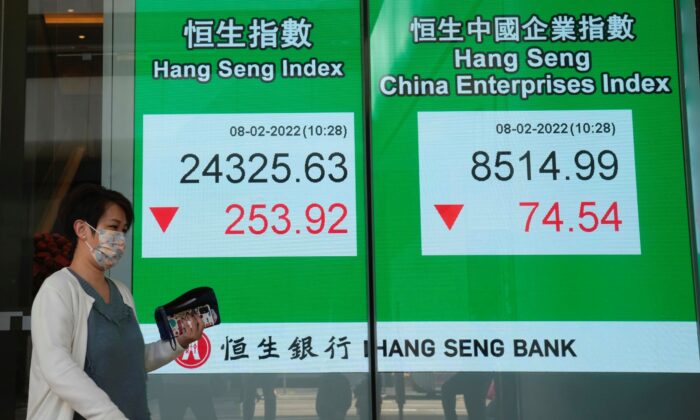 BEIJING—Global stock markets were mostly higher Tuesday as investors watched for signs of whether central banks will try to cool inflation by speeding up the withdrawal of economic stimulus that is boosting share prices.

Wall Street futures were higher after the benchmark S&P 500 index sank Monday on losses for tech and communications companies.

Markets have been uneasy since Federal Reserve officials said in mid-December plans to withdraw record-low interest rates and other stimulus would be accelerated to cool inflation that is at multi-decade highs.

Investors expect the European Central Bank to adopt a more hawkish policy for the euro at its March meeting after its board said last week that inflation risks were rising. The ECB president, Christine Lagarde, tried Monday to dampen talk of rate hikes, saying any change “will be very gradual.”

The prospect of tighter monetary policy “has prompted asset markets to falter,” Tan Boon Heng of Mizuho Bank said in a report.

On Wall Street, futures for the S&P 500 and the Dow Jones Industrial Average were up 0.2 percent.

The S&P 500 sank 0.4 percent on Monday. The benchmark is 6.5 percent below its Jan. 3 high. The Dow was little-changed while the Nasdaq composite fell 0.6 percent.

The Nikkei 225 in Tokyo gained 0.1 percent to 27,284.52 after the government reported labor cash earnings declined 0.2 percent from a year earlier in December. Core household spending fell 1 percent from the previous month.

Traders are trying to figure out how stocks will be affected as the Fed carries out plans to accelerate the withdrawal of stimulus. Investors expect at least four rate hikes this year, starting next month.

The ECB is expected to take longer to wind down bond purchases that are meant to depress market interest rates by pumping money into the financial system.

In energy markets, benchmark U.S. crude lost 51 cents top $90.81 per barrel in electronic trading on the New York Mercantile Exchange. The contract was 99 cents to $91.32 on Monday. Brent crude, the price basis for international oils, shed 61 cents to $92.08 per barrel in London. It declined 58 cents the previous session to $92.69.