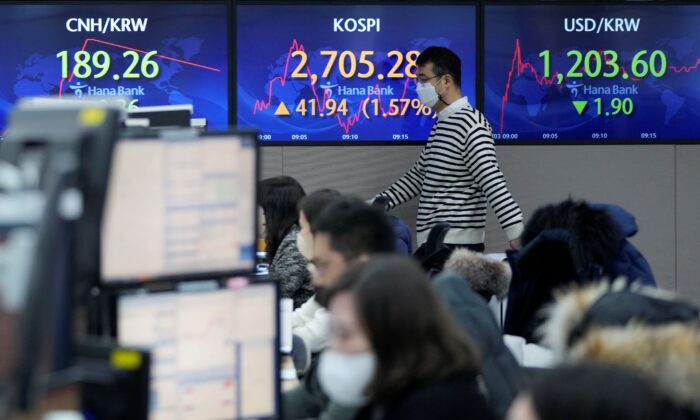 BANGKOK—Shares slipped in Europe on Thursday after a mixed session in Asia, with markets in China still closed for Lunar New Year holidays.

U.S. futures also were lower as investors watched for updates on monetary policy from the Bank of England and European Central Bank, mindful of the Federal Reserve’s plans to begin raising interest rates in March.

The Bank of England was expected to raise interest rates again Thursday, putting the United Kingdom far ahead of the rest of Europe and the U.S. in moving to tame surging inflation that is squeezing consumers and businesses.

In contrast, the European Central Bank doesn’t plan to raise rates until 2023 despite record inflation, blaming it on temporary factors. But it has decided the economic recovery is strong enough to start carefully dialing back some of its stimulus efforts over the next year. It also meets Thursday.

“Although ECB President Lagarde stated last week that the central bank has no motive to move as quickly as the Fed, pressure on the central bank to decrease support is increasing,” Naeem Aslam of Avatrade said in a commentary.

The future for the S&P 500 slipped 1 percent, while that for the Dow Jones Industrial Average gave up 0.3 percent.

Investors have been reviewing the latest round of corporate earnings to gauge the damage that rising costs on different industries and consider how companies will deal with inflation moving forward.

Most companies that have reported results for the last three months of 2021 have delivered earnings and revenue that topped forecasts, despite the higher costs they face due to rising inflation.

Oil prices fell after major oil-producing countries decided Wednesday to stick with their plan to just a bit more oil to the global economy. That will likely keep prices near their highest levels in seven years. The 23-member OPEC+ alliance opted to add 400,000 barrels per day in March.

U.S. benchmark crude oil lost 93 cents to $87.33 per barrel in electronic trading on the New York Mercantile Exchange. It had gained 6 cents to $88.26 per barrel on Wednesday.

Brent crude, the basis for pricing international oils, lost 84 cents to $88.63 per barrel.

Bond yields fell. The yield on the 10-year Treasury fell to 1.77 percent from 1.80 percent late Tuesday.

Markets are facing various threats including rising inflation, the prospect of higher interest rates, potential conflict in Ukraine, and COVID-19′s continued to drag on economic recoveries.

With inflation at a 40-year high, rising costs are threatening profit margins and putting pressure on consumer spending. The Federal Reserve intends to raise interest rates to try to tamp down price increases. Investors expect the first rate hike in March and at least three more in 2022.