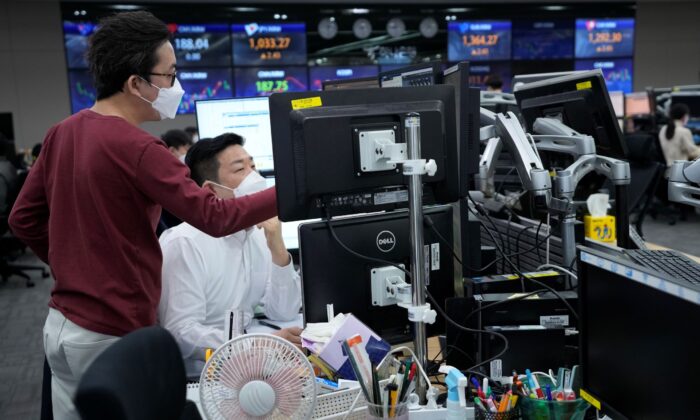 TOKYO—Global shares rose Thursday as investors tried to gauge U.S. inflation, tensions between Russia and Ukraine, and the impact of the pandemic.

Japan extended measures in Tokyo and some other places to curb outbreaks of the coronavirus for three weeks, until March 6, to try to bring the spread of the omicron variant under control.

The restrictions, mostly requests to restaurants and bars to close early, had been scheduled to end on Sunday. Prime Minister Fumio Kishida’s decision follows requests from governors in areas where daily infection cases are overwhelming hospitals.

Also on market players’ minds is how Russia has massed over 100,000 troops near Ukraine’s border, prompting protests from the U.S., Europe, and other allies. Western nations say they will impose their toughest-ever sanctions on Russian businesses and individuals if Moscow invades Ukraine.

Britain’s top diplomat flew Wednesday to Moscow, seeking to defuse tensions raised by Russia’s military buildup near Ukraine and warning that an invasion would bring “massive consequences for all involved.”

The yield on the 10-year Treasury fell to 1.92 percent on Thursday, down from 1.95 percent, the highest it’s been since before the pandemic began.

Investors are awaiting the release of the U.S. Labor Department’s report on inflation for January. Economists are forecasting that consumer prices rose 7.3 percent, a four-decade high.

An unexpectedly smaller rise in prices in Thursday’s data release could signal inflation easing and could support markets, though a bigger increase would weigh on stocks since it would up pressure on the U.S. Federal Reserve to move more quickly to raise interest rates to fight inflation.

In energy trading, benchmark U.S. crude rose 38 cents to $90.04 a barrel in electronic trading on the New York Mercantile Exchange. It rose 30 cents to $89.66 per barrel. Brent crude, the international standard, added 33 cents to $91.88 a barrel.