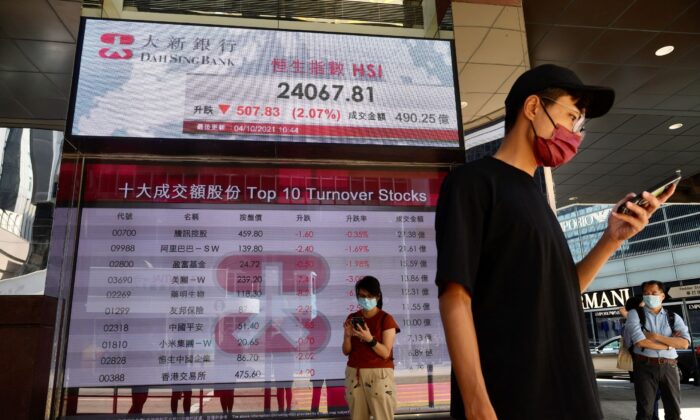 Global stocks have fallen, with Hong Kong’s benchmark down more than 2 percent after troubled property developer China Evergrande’s shares were suspended from trading.

China Evergrande did not say why it suspended its shares, but a Chinese financial news service, Cailian, said another major developer was planning to buy Evergrande’s property management unit.

Evergrande is struggling to make payments on more than $300 billion of debt as it endures a cash crunch brought on by a tightening of Chinese government restrictions on debt-leveraged financing.

The future for the Dow industrials slipped 0.3 percent while that for the S&P 500 also was down 0.3 percent.

Australia’s S&P/ASX 200 climbed 1.3 percent to 7,278.50. On Friday, its government outlined plans to lift a pandemic ban on its vaccinated citizens traveling overseas from November, though it has yet to reopen to international travelers.

Markets were closed for holidays in Shanghai and South Korea.

Crude prices fell slightly ahead of a meeting of major oil producers. There was no sign that a spill from a pipeline off the California coast was affecting oil prices.

An estimated 126,000 gallons (572,807 liters) of heavy crude were thought to have leaked from an underwater pipeline offshore from Orange County. By late Sunday the leak was reported stanched.

The environmental impact was likely to be much worse than any effect on overall oil supplies. The amount leaked was about 3,000 barrels, while the U.S. produces more than 18 million barrels of crude oil a day.

U.S. benchmark crude oil gained 9 cents to $75.97 per barrel in electronic trading on the New York Mercantile exchange. It gained 85 cents to $75.88 per barrel on Friday.

Brent crude, the international standard for pricing, picked up 19 cents to $79.47 per barrel.

Oil prices have been hovering at 3-year highs after Hurricane Ida slammed into a critical port that serves as the primary support hub for the Gulf of Mexico’s deep water offshore oil and gas industry in the U.S., worsening the supply situation, at least temporarily.

OPEC and other major oil producers were stung by deep production cuts in 2020 during the depths of the pandemic and have been increasing output slowly.

OPEC plus members due to meet on Monday could consider raising production levels to meet rising demand, Mizuho Bank said in a commentary.

Wall Street rebounded on Friday, led by companies that would benefit most from a healthier economy. The S&P 500 gained 1.1 percent to 4,357.04. But U.S. markets still had their worst week since the winter.

The yield on the 10-year Treasury was steady Monday at 1.48 percent.

September was the worst month for the S&P 500 since March 2020, when markets plunged as COVID-19 shutdowns took hold.

Among the worries that have weighed on the market: The Federal Reserve is close to letting off the accelerator on its support for markets, economic data has recently been mixed following an upturn in COVID-19 infections, corporate tax rates may be set to rise and political turmoil over the U.S. debt ceiling and funding for President Joe Biden’s infrastructure initiative continues in Washington.