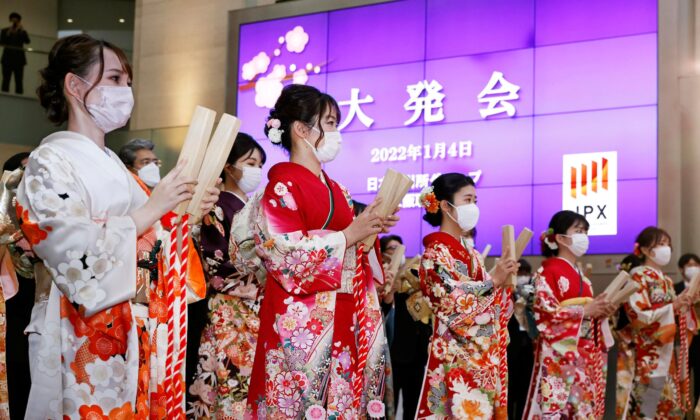 Workers attend a ceremony to mark the first trading day of the year at Osaka Exchange in Osaka, western Japan, on Jan. 4, 2022. (Kyodo News via AP)
Stocks

Finance Minister Shunichi Suzuki and other dignitaries rang a bell at the Tokyo Stock Exchange to herald the opening of trading. At the smaller exchange in Osaka, in western Japan, women carried on the tradition of attending the year’s opening ceremony in colorful kimono.

Troubled Chinese developer Evergrande announced it had been ordered to demolish a 39-building resort in the southern province of Hainan. Shares in the company were suspended from trading on Monday but resumed trading Tuesday, gaining 1.9 percent.

Evergrande is struggling with $310 billion in debt and the order to demolish the resort was a new blow to its finances.

Asia has had fewer coronavirus infections and deaths than the U.S. and parts of Europe. But worries are growing about an inevitable surge with reported detections of faster spreading omicron.

Investors have several key pieces of economic data to look forward to during the first week of the new year, including the Labor Department’s jobs report on Friday. The Institute for Supply Management will give investors an update on the manufacturing sector on Tuesday and the services sector on Thursday.

In energy trading, benchmark U.S. crude gained 32 cents to $76.40 a barrel in electronic trading on the New York Mercantile Exchange. It gained 87 cents to $76.08 per barrel on Monday. Brent crude, the international standard, rose 30 cents to $79.28 a barrel.