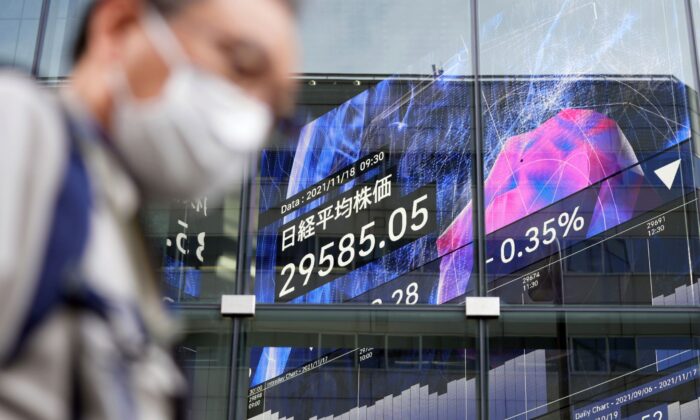 A man wearing a protective mask walks near an electronic stock board showing Japan's Nikkei 225 index at an exhibition hall in Tokyo on Nov. 18, 2021. (Eugene Hoshiko/AP Photo)
Markets

Global Shares Mixed After US Stocks Fall Back

Japan’s benchmark Nikkei 225 dipped 0.3 percent to finish at 29,598.66, although it got a brief lift from a report by the major business daily Nikkei that Prime Minister Fumio Kishida will propose Friday a government stimulus package totaling a record 55.7 trillion yen ($488 billion). The rally quickly ran out of steam as more sobering concerns, such as the coronavirus pandemic, weighed in.

Recent government data have shown the coronavirus pandemic continues to hurt the Japanese economy. A supply crunch in chips and other parts needed to produce autos, a mainstay of the world’s third-largest economy, is one reason.

The damage to consumer spending brought on by recent government measures to close restaurants early and open theaters to limited crowds is another factor. Japan has never had a lockdown but has called periodically for a “state of emergency” to curb the spread of infections.

Junichi Makino, chief economist for SMBC Nikko Securities, said the Japanese recovery that many initially expected to begin this year may not come until fiscal 2022, which begins in April.

“But extreme pessimism is not called for. Auto production will likely get back to normal by the October-December quarter,” he said.

Investors are also watching the Bank of Korea policy-setting meeting scheduled for next week for whether the central bank will raise its key rate. Policymakers have hinted at such a move.

U.S. stocks have been powering mostly higher over the last month as companies reported much stronger profits for the summer than analysts expected.

Inflationary pressures—and how much they hit companies’ bottom lines—are under the microscope, with many companies warning their profit margins could suffer due to supply-chain problems and higher costs for everything from workers’ wages to raw materials.