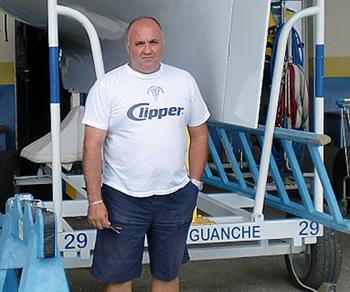 Global Q&A: ‘Does your country have any sport/pastime, that’s not well known elsewhere?’

Aug. 23, Global Q&A: “Does your country have any sport/pastime, that’s not well known elsewhere?”

Have you taken part in a sport or pastime with a difference recently? Vela Latina Canaria, gumboot throwing, or bocce are among the less known sports or pastimes that Epoch Times reporters from the Brazil to Slovakia discovered when they asked locals: “Does your country have any sport/pastime, that’s not well known elsewhere?”

One of the specific sports in the Canary Islands … is Vela Latina Canaria. This refers to a very special kind of boat, like the one behind me, with really big sails and not such a big keel. During races, in addition to the crew, (8 to 10 people usually) we carry sacks full of sand and big chunks of lead. If the wind intensity changes we are allowed to throw sand bags out of the boat, but not the lead, so to increase the speed. The boats are made of wood and it takes eight months or so to finish one since they are handcrafted by a very specialized shipwright. It is a traditional sport here in the Canary Islands and the most important races of the year are followed by hundreds even thousands of people. The boat I crew with is named Poeta Tomas Morales in memory of a famous Canarian writer and is one of the oldest boats in the competition.

Gumboot Day is held at Easter. The day was brought about to try and put Taihape on the map. In New Zealand, during the '80s there were some hard times in the agricultural sector so the Taihape promotions team used a local comedian Fred Dagg. He had success with his song The Gumboot Song and the inspiration for Gumboot Day came from this. I’ve never had a go myself; I wear them; I don’t throw them [laughing].
(Note: Jouni Viljanen of Finland has the world record for men, with 64 meters and 35 centimeters.)

Bocce is a game that arrived in Brazil with the Italian immigrants. Today, bocce is practiced by athletes. I’ve played bocce since I was a kid. In the house of my grandfather, there used to be a bocce court (bocce’s cancha). That’s an area with a ground made of very hard pressed sand. I am an athlete who has played bocce since 2002, and I currently play it [professionally] in Pinheiros Club, here in the city of São Paulo. And the money I earn playing it is enough to make a living. The bocce can be played in pairs, team or individually.

Crown Green Bowling: it’s an oblong green that is higher at the center. At the start of the match the jack is bowled anywhere on the green, not in a straight line as in flat green bowling. The woods have a bias so they will run either with or against the green. “The woods” is the name for the bowls, as they were originally made of wood, although now they are mainly made from plastic. They each weigh between 2 to 3 pounds, depending on the size of the person who is rolling. This club was founded in 1911.

One very little known and old game, played in the wine-growing region of Modra is called camprdla. With some elements similar to cricket, two teams each having from 2 up to 10 players are competing against each other. On the playground, a 50 to 70 cm [20-28 inch] high wooden log is placed. On that log, a player would put a small wooden peg, and then hit it with a bat. The goal is to obtain a maximum number of points, which are gathered if the opponents don’t catch the peg, or if the peg flies out of the playground. If the other party catch the peg, he will get the points by throwing it as close to the wooden log as possible.

Pitching horseshoes. You have a stick, it's usually about 20 feet [away], and you try to have the horseshoe circle around it. It's a silly game. In a contest, the player who gets the most on the ring wins.

‘Playground Activities’ (‘parklekar’) are staff-driven concepts, contrary to the playgrounds that are unmanned. Playground activities are not run for commercial purposes—they exist because of other driving forces to create a green oasis for people to meet in. The playground activities are equipped with objects like swings, slides, and wading pools and also a house where you can the find the staff. Their task is to build relationships by using tools like hobby articles, crafts, sports and games. Forest Mulle is also something unique; he is a fictional character who meets the children in the woods where he teaches about nature and wildlife.

Probably the Todd River [Alice Springs] boat race is probably quite unique, definitely quite unique, where as the Todd River is definitely dry at the time of year they run it. They build themselves boats out of beer cans of any description and put around themselves and run down the river as a race per such. I’m not sure what time of the year that is. When the river is dry preferably [laughing], which is 99 per cent of the time. As far as the details with that race I can’t tell you a thing about it.
[Note: 49th Henley-On-Todd Regatta was held on August 21, 2010 at Alice Springs. It is now labeled an Iconic Event for the Northern Territory, Australia.]

Look for the Global Q&A column every week. The Epoch Times correspondents interview people around the world to learn about their lives and perspectives on local and global realities. Next week’s global question: “Who would you bring back to life if you could?”