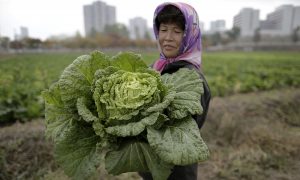 According to recent projections, the number of people living on Earth could exceed ten billion by the end of this century. Now, a new study has examined what it would take to reverse that unrelenting growth and achieve a sustainable population that is less threatening to biodiversity and ecosystems around the world. Short of a global catastrophe, scientists say, the only way to halt this population momentum is to institute a planet-wide one-child policy within a few decades.

The new study comes on the heels of a statistical projection released in September. It analyzed U.N. data from July and calculated how likely population is to end up in different ranges. In particular, it found an 80 percent chance for a population between 9.6 billion and 12.3 billion by century’s end, with the most likely figure at around 10.9 billion.

That number is not sustainable, according to Corey Bradshaw, a biologist at the University of Adelaide in Australia.

Bradshaw and his Adelaide colleague, Barry Brook, examined whether it’s possible to rein in population growth in the Proceedings of the National Academy of Sciences. They found that without draconian limits on the number of children per family, population growth is “virtually locked in.”

The researchers studied computer models of population over the next century, focusing particularly on how different parameters—or levers—affected their models.

“We’re not out there trying to predict there will be X number of people on the planet as of 2100,” Bradshaw said. “What we didn’t really know is the strength of the different levers one can pull.”

Bradshaw and Brook pulled on three levers. First was fertility: the average number of children women have. Next was mortality: the likelihood that people die by a certain age. And the last was primiparity: the average age at which women have their first child. They modeled “what if?” scenarios that adjusted these levers.

For instance, in a scenario that kept levers at 2013 levels, they found that population reached 10.42 billion by 2100, right in the middle of the statistical projections released in September. In a scenario the authors dubbed “realistic,” they cut mortality in half by 2100 to model improving diets and the availability of medicine. Additionally, they shifted primiparity to older ages and lowered fertility from its 2013 value of 2.37 children per woman to 2. Their model still predicted 10.35 billion people by 2100, a negligible difference in terms of sustainability.

To model what would happen if all governments globally restricted families to just one child, they examined two scenarios: smoothly reducing global fertility to 1 child by 2100, or more aggressively by 2045. In the former case, the population peaked in the middle of the century and then declined to around seven billion by 2100. In the more draconian case, population by 2100 shrank more quickly, ending at 3.45 billion.

Even this last figure is still bigger than some estimates of a sustainable human population, which fall between one and two billion. Those numbers are difficult to estimate because they depend heavily on social and technological developments, as well as how much people consume. But what’s clear is that population won’t even begin to approach these numbers in the coming decades, short of utter catastrophe.

“Our point was merely that in the short term our biggest gains in sustainability will be held by reducing per capita consumption, although underneath all that we must also reduce population,” Bradshaw said. “It will just take a lot longer to achieve.”

The point was well made, said biologist Thomas Lovejoy of George Mason University in Virginia, who coined the term “biological diversity” in the 1980s.

“The real value of this paper is bringing a sense of the magnitude, rate and complexity of the population problem home to those who worry about the supply side,” Lovejoy told mongabay.com.

Reducing consumption might ease another troubling trend, Bradshaw and Brook noted. Their models predicted that the regions with the planet’s highest biodiversity could also have the biggest population booms this century, increasing the stress on these ecological treasures.

“It really shows you where the most damage is likely if things continue as they are now,” Bradshaw said.

Chris Cesare is a graduate student in the Science Communication Program at the University of California, Santa Cruz.

This article was originally written and published by Chris Cesare, a special correspondent writer for news.mongabay.com. For the original article and more information, please click HERE.