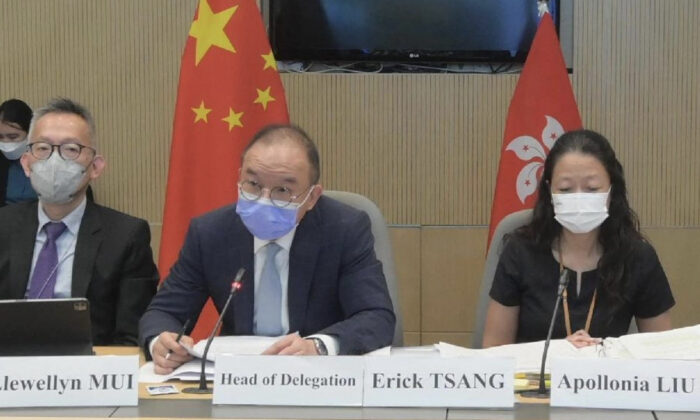 The United Nations Human Rights Committee (UNHRC) once again reviewed Hong Kong’s status under the International Covenant on Civil and Political Rights. It was the first time such a review took place since the “forceful” implementation of the Hong Kong National Security Law (NSL) on June 30, 2020.

During the three-day meeting, on July 7, 8, and 12, many UNHRC members raised concerns about the impact of the NSL on the human rights deterioration in Hong Kong.

Retaliating, a representative of the Hong Kong government (HKgov) said it would not rule out prosecuting non-government organizations for participating in the UN review on potential charges of “colluding with foreign forces” under the NSL.

Concerns About Violation of the NSL

A committee of 18 experts deliberated over the three-day hearing. Numerous members or vice-chairpersons had repeatedly asked whether the UN or its human rights institutions would be counted as a “foreign organization” or “foreign political organization” under Cap. 151 Societies Ordinance of the NSL.

Members also raised their concerns about whether NGOs worldwide which communicated with or advised the UN would be held accountable, retaliated against, or charged with colluding with foreign forces under the NSL.

However, the Deputy Secretary-General of the Security Bureau, Apollonia Liu Lee Ho-kei, who attended the video conference on behalf of HKgov, said that the Basic Law of Hong Kong guarantees standard international exchanges. However, whether their communication with the UN is illegal cannot be generalized since it would depend on the relevant facts and circumstances and the behaviors displayed by each organization.

Members were not satisfied with HKgov’s response, criticizing it as “vague” and “ambiguous,” which was not enough to eliminate doubts. Photini Pazartzis, the chairperson of UNHRC, concluded the meeting by expressing hopes that NGOs would not be ‘punished’ against NSL after they had made contact with the UN.

HKHRIC: No Collusion Should be found as China is a UN Member

The Hong Kong Human Rights Information Centre, which also submitted reports for the UNHRC, stated that HKgov did not address the question properly. What their representative said was not enough to tell the world that ordinary participation would not constitute collusion without explaining what “ordinary” and “standard” participation meant.

It said it was a further indication that under NSL, the coverage of “collaboration with foreign forces” is too vague and broad, and it is easy for people to fall into legal malaise.

The Centre continued that the UN protocols apply to both Hong Kong and China, with the latter signing many different conventions. China is also an active member of the UN. It would be against the members’ rules for any discussion or communication between civil groups and the UN to be regarded as collusion with foreign powers.

The Organization also stated that during the three-day meeting, members raised many in-depth and critical issues on the human rights situation in Hong Kong, from the appointment of NSL judges to the case of Tonyee Chow Hang-tung, the dissolution of civic groups and smart prisons in Hong Kong.

The “Hong Kong Human Rights Information Centre” and the “Hong Kong Rule of Law Monitor” submitted a 78-page report to the UN Human Rights Committee, citing several local court cases that displayed the deterioration of the human rights situation in Hong Kong and that Hong Kong had been suffering from a dire regression in the Protection of the International Covenant on Civil and Political Rights.

Their report also made recommendations and requested the committee to declare CCP’s actions as “inconsistent with its obligations” under the International Covenant on Civil and Political Rights.

Professor Johannes Chan Man-mun, an adjunct professor at the School of Law of the University of Hong Kong, wrote in a column on Ming Pao that members of the committee questioned the damage NSL had caused Hongkongers’ rights. If the HKgov was sincere in maintaining Hong Kong’s status as an international city, it must seriously reflect and recognize the international community’s positive criticism against Hong Kong instead of repeating “everything is for the sake of national security.”