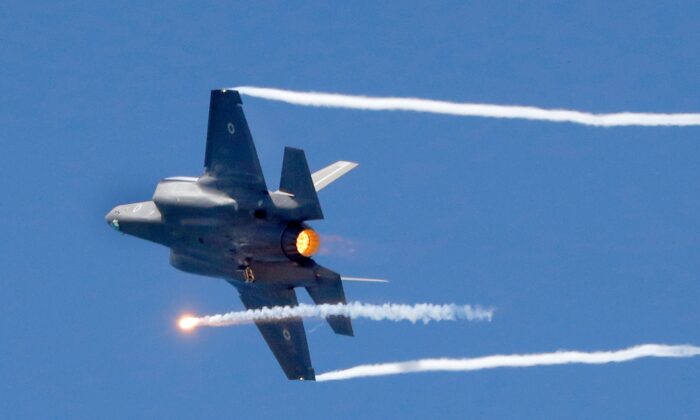 An Israeli F-35 fighter jet performs during an airshow over the beach in the Mediterranean coastal city of Tel Aviv, on May 9, 2019. (Jack Guez/via Getty Images)
International

Global military spending in 2019 jumped more year-on-year than it has in a decade, according to an annual report.

That rise is due mainly to China continuing its decades-long military ramp-up, and to the United States continuing a two-year spending increase after several years of steady decline.

The International Institute for Strategic Studies’ (IISS) annual Military Balance report, published Feb. 14, puts U.S. military spending in 2019 at $684 billion—a 6.6 percent increase from a year earlier. However that falls short of the 2010 peak of nearly $800 billion during the war on terror.

After China and the United States is Saudi Arabia, with expenditures of $78.4 billion, then Russia, which spent $61.6 billion, and India close behind at $60 billion. The next four in order of military spending are the United Kingdom, France, Japan, and Germany.

According to the IISS results report, defense spending also rose in Europe, as NATO members shift to tackle a revanchist Russia, while being nudged by a budget-conscious United States to meet their military spending obligations.

“These increases in Europe are part of an international trend,” report states. “Global defense spending rose by 4.0 percent in real terms compared to 2018 data, when measured in constant 2015 dollars.

Since the end of 2017, the U.S. military has been modernizing itself, refitting its counter-insurgency force armed with Cold War equipment with a modernized force able to counter great power competition with Russia and China.

That modernization has been assisted by a bump in 2018, 2019, and 2020 Pentagon budgets—as reflected in the IISS report.

However, the U.S. military is now trying to pivot within a flat 2021 budget proposal already locked in by Congress and is looking to shed maintenance-heavy Cold War-era systems.

China’s military spending has increased every year for the past two decades—at times rising by estimates of 10 percent annually.

The IISS report noted that Russia and China “continue to accelerate their military modernization,” highlighting the growing arsenal of missiles being developed and deployed by China and Russia, which blunt U.S. air supremacy.

For Russia, such developments include the Burevestnik nuclear-powered and nuclear-armed cruise missile, and the Avangard hypersonic missile, which, according to IISS, was “on the brink of service entry at the end of 2019.”

Russia and China are currently thought to be ahead of the United States in the development of hypersonic missiles.

“China’s October 2019 military parade, marking the 70th anniversary of the People’s Republic, highlighted the breadth of its military modernization process and showcased systems designed to achieve military effect faster and at greater range than before,” the IISS report said. “The DF-17 hypersonic glide vehicle was displayed at the anniversary parade.”

Difficulties with the Data

Producing accurate estimates of China’s military spending is in general very difficult due to deliberate obscuring of the figures.

Then there’s the blurred line between military and civilian spending, Rick Fisher, senior fellow at the International Assessment and Strategy Center, previously told The Epoch Times.

“Under Civil-Military Fusion, you now have a broader requirement for the economy to serve the military. In essence, anything under the control of the Chinese Communist Party that it deems is necessary for military power construction can be diverted to that end. So it is possible to ask: is it now essentially impossible for anyone, even Chinese, to tell you a real number for Chinese military expenditures?”

Even if the spending figures are obtained, however, the use of market exchange rates to produce comparisons can skew the comparisons, other analysts have previously told The Epoch Times.

For example, according to their analysis, Russia’s defense spending in 2018 wasn’t around the $60 billion mark, but close to $160 billion. And their calculations put China’s spending at around $450 billion, equivalent to nearly 75 percent of U.S. military spending.

Chairman of the U.S. Joint Chiefs of Staff Gen. Mark Milley told a Senate committee in 2018, “We’re the best-paid military in the world by a long shot. The cost of Russian soldiers or Chinese soldiers is a tiny fraction.

“I think you’ll find that Chinese and Russian investments, modernization, new weapons systems, etc., their [research and development]—which is all government-owned and also is much cheaper—I think you’d find a much closer comparison,” Milley said.

But no matter what the measure, there is a broader agreement across all the data that China’s military spending has increased around tenfold in the past 20 years.

U.S. military spending almost doubled during the “war on terror” to peak at about $800 billion in 2010 before slowly declining.

Deputy Secretary of Defense David Norquist told reporters at a 2021 budget proposal briefing that the Trump administration had inherited a military that had been operating under “destructive spending caps.” That had left the United States with its smallest military since 1940, along with key munition shortages, low readiness levels, and an outdated nuclear deterrent, he said.

The military’s pivot away from a counter-insurgency outfit is hampered by Cold War-legacy systems and old maintenance-heavy equipment. Even without the push for modernization, the military is caught between the high costs of maintaining out-of-date equipment and the high costs of buying new gear.