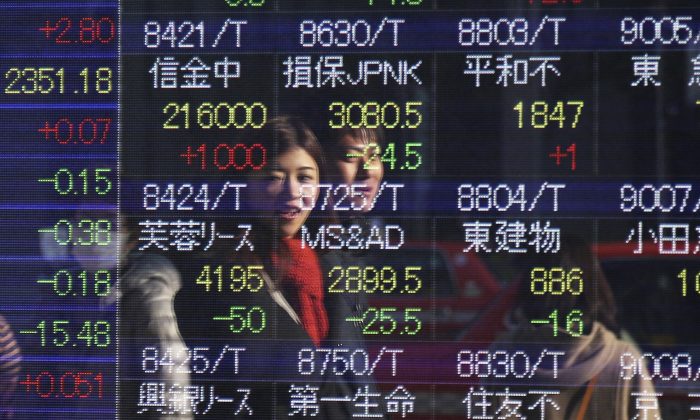 People are reflected on the electronic board of a securities firm in Tokyo, Tuesday, Dec. 30, 2014. Asian stocks were mostly lower Tuesday as concern about Greek politics and the shaky Russian ruble dented confidence in the global economy.(AP Photo/Koji Sasahara)
Business

SEOUL, South Korea— Global stock markets fell Thursday after the Federal Reserve cuts its forecast for U.S. economic growth and expectations faded that Greece might reach a deal this week to get more loans.

THE FED: The Federal Reserve left interest rates unchanged as expected on Wednesday and said in a statement that it wants to see further economic gains and higher inflation before raising interest rates from record lows. The policymakers, while noting a strengthening U.S. economy, sharply lowered their estimate of growth this year, from a range of 2.3 percent to 2.7 percent estimated in March to a range of 1.8 percent to 2 percent. While investors welcome news of a delayed rate increase, the lower forecasts could dampen earnings expectations.

ANALYST’S TAKE: “While the decision not to raise interest rates this time was as expected, the decision to cut its GDP forecast for the second time in a row suggested to the markets that U.S. economic growth is still less than expected,” Nicholas Teo, an analyst at CMC Markets, said in a commentary. “This cut in the GDP forecast pretty much rules out an interest rate hike in July and makes September unlikely unless the economy turns around in a big way soon.”

GREEK DRAMA: Lack of progress in talks between Greece and its international creditors is also on the minds of investors. Greece and its creditors publicly blamed one another for an impasse in bailout talks, on the eve of a eurozone finance ministers’ meeting. Greece needs more loans from its creditors before June 30, when its bailout program expires and it is scheduled to make a 1.6 billion euro ($1.8 billion) debt repayment. A default could result in Greece leaving the euro currency bloc, dealing a blow to the Europe’s grand integration project. Hopes of a deal on Thursday were low.

ENERGY: Benchmark U.S. crude added 75 cents to $60.67 per barrel in electronic trading on the New York Mercantile Exchange. The contract closed up 5 cents at $59.92 per barrel in New York on Wednesday.