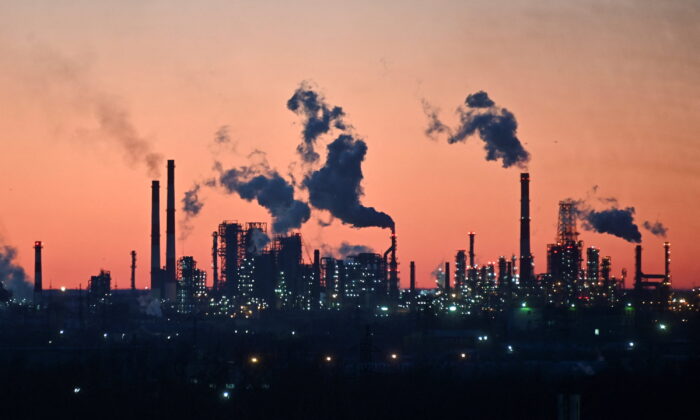 Oil prices went up again and equity markets remained jittery as the war raged in Ukraine with peace talks dragging on without clear conclusions, while the U.S. central bank tries to curb inflation amid signs of a possible recession.

Brent was trading around $110 a barrel as of 8:50 a.m. EST, a climb of over 1.44 percent since opening. Investors are awaiting speeches from Federal Reserve chair Jerome Powell and European Central Bank President Christine Lagarde later in the day for understanding how policymakers manage to balance between post-pandemic recovery and looming economic recession.

There has been a marked flattening of the Treasury yield curve in recent weeks as the spread between 2-year and 10-year notes has shrunk to 21 basis points, the lowest since the beginning of the pandemic two years back. An inversion in the curve is typically associated with an economic recession, though experts say it’s not a definitive predictor.

Progress in peace talks that would signal an end to the Russian invasion of Ukraine had cooled down oil prices last week but tight supplies and ceasefire-agreement complications have again boosted commodity prices. Turkey, a key player leading negotiations, has indicated that there was hope for a ceasefire but was unsure regarding the timing.

Yemeni Houthi rebels attacked a Saudi Aramco refinery over the weekend leading to a temporary drop in oil output. Global supplies are facing multi-year lows in oil inventories. This comes at a time when Western allies are considering sanctioning Russian oil.

Markets anticipated Russia to default on interest obligations but Moscow managed to make a payment last week. However, more payment deadlines are coming soon, like the $615 million in coupons this month and a $2 billion bond that comes due early April.

President Joe Biden is expected to meet NATO allies this Thursday followed by a visit to Poland. He is expected to reinforce the Western stance against the Russian incursion amidst a rise in attacks in the southern port city of Mariupol where Ukrainian forces have refused calls to surrender.

After closing its biggest weekly percentage gain since November 2020 on Friday, European shares crawled higher in the opening. Shares have now settled lower with the STOXX 600 decreasing by 0.16 percent as the fighting continues to dampen market vigor.

The producer price index has gone up 1.4 percent on the month in Europe’s biggest economy, Germany. Combined with a record slide in March, this points toward a scenario where recession cannot be wholly dismissed.

France is going into the voting booths next month and President Emmanuel Macron, seeking reelection, knows well the impact of higher fuel prices on popular support. Gas prices were one of the main reasons for the yellow-vest protests that rocked the nation earlier.

More interest rate cuts are anticipated by the market and this week’s talks by central bank policymakers will provide clues to the frequency and aggressiveness of rate raises. There is a 90 percent probability of at least 75 basis point hikes across May and June Fed meetings, based on CME’s Fedwatch tool.

High expectations of interest rate hikes have provided stability to the recent dollar climb. Since the market has mostly priced in the rate hikes, it is difficult to predict whether the currency could gain further traction. The dollar index is currently at 98.22.

EUR/USD is currently trading at the 1.1060 mark mainly due to the strength of the dollar. GBP/USD is trading at 1.3151 after the correction following the Bank of England hiking interest rates by 25 base points. Inflation continues to plague the UK economy.

Gold prices had fallen over the past few days as peace talks progressed but the slide has since halted and the metal finds support with renewed political tensions regarding Ukraine. It is currently trading at $1,927 but is not expected to spike amid a firmer dollar, according to predictions by FX Street analysts.