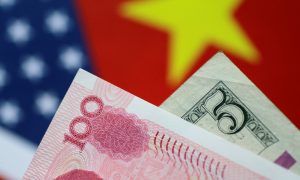 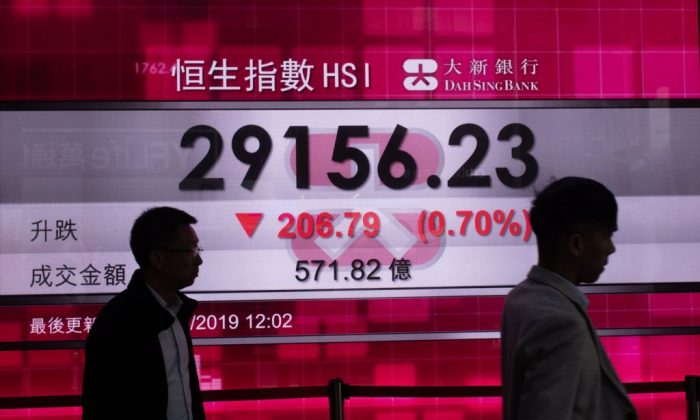 Pedestrians walk in front of a stock display board that shows the Hang Seng Index in Hong Kong on May 8, 2019 (PHILIP FONG/AFP/Getty Images)
China Business & Economy

WASHINGTON—The recent U.S.–China trade dispute has prompted the biggest capital outflow from Chinese equities in nearly four years. More than $6 billion of capital has fled China’s stock market since May 6, according to data compiled by the Institute of International Finance (IIF).

Tensions escalated between the United States and China when Trump wrote in a tweet on May 5 that he would increase tariffs on $200 billion Chinese goods to 25 percent from 10 percent. Trump accused Beijing of backtracking on its commitment to deliver structural reforms.

The dispute revealed the vulnerability of China’s stock market, with the Shanghai Stock Exchange Composite Index falling nearly 6 percent on May 6, the day after Trump’s tweet. The stocks haven’t recovered since then.

The total outflow from Chinese stocks by nonresidents since tensions escalated reached $6.2 billion, according to IIF, which has tracked capital movement in emerging market equities on a daily basis since 2010.

Trump’s tweet and the intensification of the trade conflict came as a big surprise to investors, according to Jonathan Fortun, an economist at IIF.

“This last round of outflows is a knee-jerk reaction to everything that has been happening,” he said.

Chinese stocks saw net outflows of $2.6 billion and $2.8 billion for the weeks ending May 10 and May 17, respectively. These weekly exits were the largest since the Chinese stock market crash in 2015. The largest weekly capital outflow occurred during the week ending July 10, 2015, when the Chinese stocks plunged 30 percent in three weeks.

Significant outflows in the past two weeks were triggered by the unexpected nature of the flare-up in trade tensions, Fortun said. Investors were building up their exposure to the Chinese stocks with the expectation that the conflict was de-escalating, he explained.

Outflows have continued into the week of May 19, where a total of $0.9 billion in capital fled Chinese equities on May 20 and May 21.

“I think the outflows are going to continue, at least until we have a little bit more clarity on the path forward for the trade conflict,” Fortun said. “We are not in the super worst part yet, but I think that this could potentially be an important outflow cycle for China.”

China saw around $1.1 billion of capital flight in October 2018 during the initial trade frictions between the United States and China.

The tariffs dispute has triggered a significant amount of capital outflow from emerging market equities as well.

Countries such as South Korea, India, Taiwan, Brazil, and Indonesia have mirrored China’s trend, highlighting the risks to the broader markets from increased trade tensions. Outflows from emerging markets excluding China totaled $8.4 billion since May 6.

According to Fortun, the U.S.–China trade conflict also will hit emerging market economies, since it involves the disruption of global supply chains spanning many countries.

Recent outflows are different than what was observed during the 2015 market crash. The capital that left China went to other emerging markets in 2015. However, this time, the money is flowing into developed markets, bonds, and crypto assets, Fortun said.

The Trump administration has used the threat of tariffs as part of a negotiation tactic to increase pressure on Beijing. And China has more to lose economically in a full-blown trade war, according to analysts.

The United States began imposing tariffs on Chinese imports in July 2018. Together with the previous two rounds of tariffs, a total of $250 billion worth of Chinese goods now face a 25 percent levy.

Washington also is preparing to impose tariffs on the remaining $325 billion in Chinese goods, which targets the majority of consumer goods imported from China. Beijing also announced it would boost tariffs on $60 billion of U.S. goods in retaliation.

“This time around, tariffs are going to a wider range of goods,” Fortun said, disrupting the global supply chain. Potential tariffs on autos and auto parts by the United States are making investors nervous, he added.

Despite renewed tensions, Trump said the talks with Beijing would continue. He said on May 13 that he would meet face-to-face with Chinese leader Xi Jinping at the G-20 summit in late June in Japan.

In a series of tweets, Trump accused China of backing out from “a great” and “almost completed” deal and urged China to strike a trade deal soon.

According to Fortun, the capital flows, especially in equities, are very dynamic and as the trade issue gets resolved, the capital will start to quickly flow back in China.

“Any sign of willingness to have a real resolution of the trade conflict will be positive not only for China but for the whole emerging market complex,” he said.

Investors will return once the storm ends, he said, but until then, they will continue to keep their money offshore in different types of liquid assets.