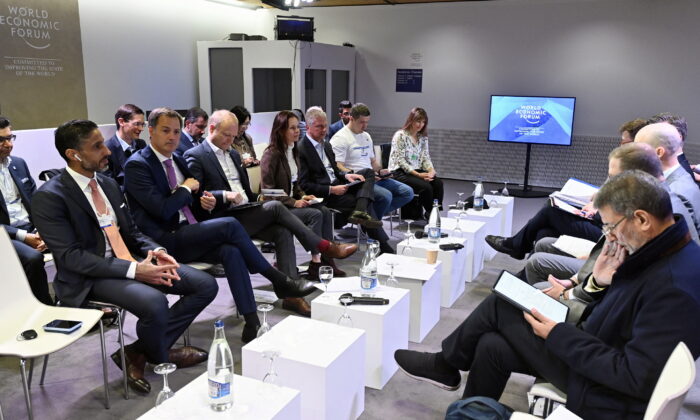 The panel 'Leaders for Europe's Digital Decade' at the 2022 World Economic Forum Annual Meeting in Davos, Switzerland, on May 25, 2022. The yearly meeting takes place from May 22 to 26 with heads of governments and economic leaders. (Eric Lalmand/Belga Mag/Pool/AFP via Getty Images)
Viewpoints

Global Influence Shifting to the World Economic Forum From the UN

Is the World Economic Forum replacing the United Nations as the world’s most influential institution?

When you compare the two in terms of power, influence, and location, it sure looks that way.

That makes sense, doesn’t it?

Nations have relations with other nations. The United States has been the leader of nations for most of the U.N.’s years of existence, instituting the liberal economic order that led to the greatest expansion of wealth around the world in history.

There are, of course, U.N. organizations and non-government organizations (NGOs) that act for the U.N. in various capacities. But the key points are that as the global leader of nations, the world came to the United States—to the U.N. building in New York—to solve problems and disputes between nations.

But is the U.N. still so important?

In fact, it’s more accurate to say that the world is rapidly moving away from the U.N.—and particularly U.S. leadership—because it has simply failed to live up to or even promote or defend the traditional values and ideals upon which it was founded. Those simple facts are clear and leave one to conclude that the United States is being marginalized as a global military, economic, technological, and cultural force.

Led by Klaus Schwab, the World Economic Forum (WEF), based in Davos, Switzerland, has stepped into the power and leadership vacuum left by America’s shrinking influence.

A new, digital authoritarian international order is emerging, with huge implications for the world and the United States.

First, it’s notable that the WEF is a European-based organization. This clearly represents a power shift to Europe and the European Union, the world’s largest economic bloc.

The WEF Steps Up and the World Follows

What’s more, the power, comprehensive reach, and prestige of the WEF are undeniable. The support of established technology leaders and emerging tech firms around the world bring an unrivaled source of technological power to Davos. The list of WEF corporate partners is all-encompassing.

The WEF also boasts a posse of Young Global Leaders alumni, which is a “who’s who” of political leaders around the world and includes Emmanuel Macron of France, Justin Trudeau of Canada, and Boris Johnson of the United Kingdom, to name a few.

Theological leaders such as Pastor Rick Warren, a plethora of cultural icons, and 100 of the top corporations worldwide are also on the WEF roster.

Sadly, they all seem to be on board with the WEF vision for a “Great Reset.”

The agenda that Schwab and his WEF are pushing on the rest of the world—and they are pushing, by the way—is completely against every freedom, every right, and even every sense of nationhood that America stands for.

That’s a very bad idea. It’s bad news for those who love freedom and self-determination.

The proposed new world order is based on top-down governance comprised of “stakeholder capitalism,” which is more of a fascist model, targeting outcomes dictated by governments rather than responsibilities to shareholders. The upshot is that it replaces our notion of capitalism in favor of leadership capitalism that leaves shareholders out, focusing near-absolute power over businesses.

Compliance with new economic, political, medical, and speech laws—and the enforcement of them—figure prominently in the world view of those in the WEF. More to the point, the WEF has the backing and cooperation of the world’s more important companies, leaders, lawmakers, medical, business, and trade organizations.

A quick rundown of just a few of the ideas driving the WEF toward global dominance in its Great Reset paints a very dreary picture.

A Dystopian Vision on Its Way?

What would the WEF’s vision of a global society look like?

For one, it would demand “digital cooperation,” which means “meet(ing) the needs of the Fourth Industrial Revolution while seeking to advance global analysis, dialogue and standards for digital governance and digital inclusiveness.” That quote is from Schwab, as are all the others to follow.

Apparently, it means “governance by digital cooperation” and is needed to “meet the needs of the Fourth Industrial Revolution.”

And what does the “Fourth Industrial Revolution” entail?

Among many other things, it could mandate that human beings be digitally tagged, tracked, monitored, and controlled by the elites, without any choice or control over your own body. It’s the blending of the biological with the digital to create a hybrid human life form.

That’s everybody, by the way, all of us in the world. It ties nicely with the WEF’s agenda of “public and private cooperation, involving top-down control over all businesses big and small.”

In short, the WEF’s imposition of technology, green energy, controlled media, and the stripping away of traditional cultural norms to build a global society of transhumanism, digitally altered human beings, and rule by the elite is the goal.

It’s all there in black and white. That’s what they want to do, and the United States has, apparently, no say in the matter.

Sounds like a complete and utter nightmare to me.

I don’t know about you, but I feel better knowing that God is the One who is really in charge and not Klaus Schwab.