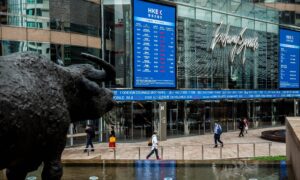 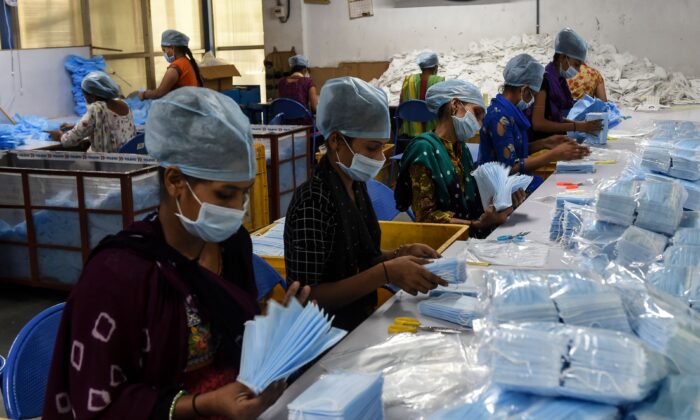 Employees pack surgical facemasks at a factory near Changodar, some 20 kms from Ahmedabad, India, on Nov. 8, 2020. (SAM PANTHAKY/AFP via Getty Images)
Economies

Global foreign direct investment (FDI) fell by 42 percent in 2020 to an estimated $859 billion, the lowest level since the 1990s, according to a new report by the United Nations Conference on Trade and Development (UNCTAD).

The total investment flow last year was more than 30 percent below the trough seen after the 2008–2009 global financial crisis.

Developed countries accounted for almost 80 percent of the decline, with fund flows plummeting 69 percent. The FDI flows to the United States were halved last year, due to sharp declines in greenfield investment (in which an organization builds its operations from the ground up) as well as cross-border mergers and acquisitions (M&A).

Investments dropped sharply or dried up in many European countries, including the UK, Italy, Germany, and France.

Global FDI is expected to remain weak in 2021, according to the UNCTAD report.

“The effects of the pandemic on investment will linger,” James Zhan, director of UNCTAD’s investment division, stated in a press release. “Investors are likely to remain cautious in committing capital to new overseas productive assets.”

The data showed that China became the largest recipient of FDI with a 4 percent increase last year, overtaking the United States as the world’s leading destination for investments. China attracted more than $160 billion, followed by the United States with $134 billion.

FDI flows to India rose by 13 percent to $57 billion, buoyed by M&A deals in technology, infrastructure, and energy sectors.

In addition to the health crisis, national security concerns in recent years have prompted tighter rules on foreign acquisitions, reducing FDI in many countries.

The United States has enhanced its investment screening process to tackle national security threats posed by Chinese investments in particular. The Foreign Investment Risk Review Modernization Act was passed by the U.S. Congress with overwhelming bipartisan support and was signed into law by President Donald Trump in 2018. This is seen as one of the main reasons for the sharp drop in Chinese investments over the past few years.

Both developed and emerging countries have introduced measures to boost investment-screening mechanisms, in response to the rise in national security concerns. Countries want to ensure that cutting-edge technologies and know-how remain in domestic hands, as they are key to a nation’s competitiveness. In addition, there’s also an increased crackdown on investments by foreign state-owned enterprises or sovereign wealth funds. All these trends are expected to cut global FDI in the coming years.

The recent health crisis has also served as a wake-up call to governments around the world on the need for self-sufficiency. Many countries have turned their attention to create resilient supply chains in key sectors, including health care, technology, food, energy, and manufacturing.

“This push toward producing more goods at home, using domestic companies, will only increase in the next five years over the course of the great shakeout brought about by the pandemic,” according to a report by management consulting firm Kearney.

The trend to improve domestic capabilities, which started with the Trump administration, will likely continue under the new administration. President Joe Biden on Jan. 25 signed a “Buy American” executive order that requires the federal government to purchase U.S.-made goods to boost domestic manufacturing.