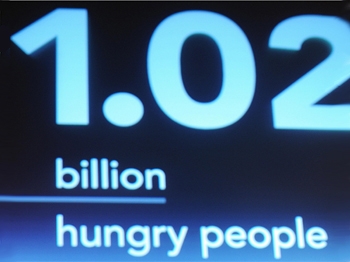 David Tompkins
biggersmaller
Print
As the world begins to move beyond the financial crisis, the global food crisis that occupied center stage in 2008 seems relegated to collective amnesia. It brought the issues of global food security to the forefront, but then food prices moved back to their pre-crisis trends and it went away as quickly as it had come. However, the fundamental causes that triggered the rapid price increases and the riots that ensued, in some areas, have not changed.

The spike in grain prices can be attributed to poor harvests in various parts of the world, lower food stocks held in reserve globally, oil price rises, and banning of grain exports in certain grain exporting countries.

Severe droughts persist in many parts of the world, including China, Australia, southern Asia, Argentina, and the United States. Two thirds of the world’s grain production comes from these countries.

A large percentage of the global food stocks are held in China (35.7 percent for wheat and 53.5 percent for rice). China is not a major exporter of either commodity. Its stocks are for domestic consumption and shouldn’t factor into the world price.

High oil prices affect the price of grain through the increased costs of fertilizer and transportation. But high oil prices also encourage farmers to divert land away from food to biofuel. The future will likely see food prices rise along with the price of oil, so long as the United States and Europe have a need to develop self-sufficiency in fuel.

The export bans in 2007 and 2008 in numerous grain exporting countries like China and India for rice and Russia, Kazakhstan, and India for wheat left many grain importing countries scrambling. As Karim Masimov, the Prime Minister of Kazakhstan said when lifting their export ban in 2008—grain and bread prices should not rise, but if the prices on the domestic market do change, he would order another export ban.

Trends Affecting the Utilization of Resources

Among other problems, the convergence of three trends lurks behind the growing problem of global food insecurity.

The global population is expected to reach 8 billion by 2028, and highly populated countries like India, China, as well as many Latin American countries are experiencing a rapid expansion of their middle-class. They eat more meals and demand more meat, which is a resource-intensive commodity.

Water scarcity, according to the World Health Organization, affects one in three people on every continent of the globe, and the situation is getting worse as needs for water rise along with population growth, urbanization, and increases in household and industrial uses.

In an era of industrialization, countries tend to assume that cash is scarce and all other resources are unlimited. Such an assumption may have worked to a certain degree in the nineteenth and twentieth centuries, but it doesn’t work for populations facing increasingly finite resource constraints for water and productive, arable land. The optimal utilization of resources necessary for food security cannot be achieved by organizations that have a singular focus of increasing shareholder returns.

At the Doha Round of trade talks held in Switzerland in 2008 talks fell apart into bitter accusations being traded between India and the United States. Kamal Nath, India’s Trade Minister at the time, told journalists "The most important thing was the livelihood security, the vulnerability of poor farmers, which could not be traded off against the commercial interests of the developed countries."

The global seed market illustrates the basis of this disagreement and why those in the developing nations cannot give in. A handful of firms dominate global seed sales Monsanto, Dupont, Syngenta, all of whom are among the world’s top-ranking pesticide firms.

These seed companies skew their research to achieve breakthroughs in biotechnology that produce seeds that are compatible only with certain brands of pesticide or supply patented terminator seeds which germinate just once, meaning seeds from one harvest cannot be used to grow a second crop. How would these types of innovations benefit the local farmer?

These seed companies are being entirely responsible to their shareholders by maximizing profit, but in the process what they accomplish is something that diminishes global food security rather than improving it. This is not a challenge the nineteenth and twentieth century industrialization had to deal with.

A Perspective from the Developing World

Asif Mehdi in an article in Aljazeera entitled “The 21st century's bleak harvest” argued three points are important to food security from the perspective of the developing countries.

First, food security is an issue that requires long-term international effort and food security demands that local agriculture be able to supply domestic needs wherever possible and that reserve stocks are maintained for difficult times.

Second, the demand by India for a "special safeguard mechanism" (SSM) that ultimately caused the collapse of the Doha Round of trade negotiations is vital for protecting the livelihood of local farmers in developing countries. This would allow developing countries to apply a special tariff on certain agricultural goods in the event of an import surge or price fall.

Third, national development efforts need to be replenished with such 'old fashioned' endeavors as investing in rural production, water availability, and the empowerment of the small farmer.

While these measures do generally allow for the increased availability of food, they have also eroded domestic agriculture and impoverished the rural economy, often in the most economically fragile states. This has left a large group of nations, particularly in Africa, that have to import wheat and rice to survive.

The theory in the west has been that by reducing tariffs and opening up world markets the price of food would over the long-term come down as food production became more and more efficient. In a perfect world that should work. But market distortions like export bans, ethanol subsidies, floods, droughts, and so many other problems make this would-be theory less than practical.

In the developing world it is commonly said that people spend about half of their income on food. We have been living in a grand social experiment that is supposed to allow developing nations to move away from their traditional livelihoods to enter an era of industrialization where there is greater abundance. China and India have certainly made strides in that direction, with the expansion of their middle classes. But the vast majority of the world’s poor in developing nations are now worse off.

This year, while food stocks continue to increase globally, many developing countries in Africa from Somalia to Uganda are facing hunger. Food prices there have risen beyond what people can afford. The greatest shame in all of this is that despite the drought they are going through, this is largely policy driven.