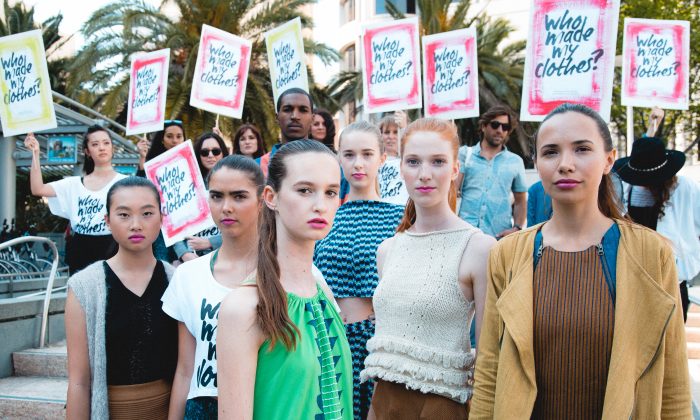 Many fashionistas will be asking “Who made my clothes?” during Fashion Revolution Week. A hundred global brands feature in Fashion Revolution’s Transparency Index, where brands are ranked according to how open they are about their supply chains. (Bryan Berry)
Europe

Four years since Bangladesh tragedy, research reveals many brands have 'a long way to go'
By Jane Werrell

Global fashion brands like Dior are choosing not to disclose information about their supply chains, new research has revealed.

The Fashion Transparency Index analysed 100 global brands and retailers with revenues over $1.2 billion and ranked them according to how open they are about their supply chains.

The lowest scorers include Dior, Heilan Home, and s.Oliver because they chose not to disclose any information.

Adidas, Reebok, Marks & Spencer, and H&M scored higher, partly because they published the list of factories where their clothes are sewn together.

It’s a continued effort to change the industry for the better by fashion-lovers and activists at Fashion Revolution, a global movement that calls for more transparency in the fashion sector.

Carry Somers, co-founder of Fashion Revolution said that even the top scoring brands still have “a long way to go” towards being more transparent about their processes. For example, Adidas and Reebok, the highest rankers, scored 49 per cent of the total possible points. Few brands disclosed efforts to pay the living wage to workers in the supply chain.

None of the brands published their raw material suppliers.

The results from the transparency index were published on 24 April, the first day of Fashion Revolution Week, and mark four years since the Rana Plaza garment factory in Bangladesh collapsed, killing 1,138 and injuring 2,500 people.

In response to the tragedy, Somers and ethical fashion designer Orsola de Castro started Fashion Revolution in the UK in 2014. It unexpectedly snowballed into a global movement. Last year, over 70,000 people across the world asked brands #whomademyclothes and there were 156 million impressions of the hashtag.

“After the Rana Plaza factory collapsed, we knew that all of those lives could not be lost in vain. That this had to stand for something. Many people had been warning for several years that the disaster on this scale could occur, because the supply chains are just so opaque,” said Somers.

“We couldn’t let this go past and be dismissed with yet another disaster which happened in the name of fashion.”

The index shows that the journey many of our garments have travelled to arrive at our favourite high street stores remains a mystery. From farming and growing, to the ginning, spinning, weaving, dying and the people who sew the garments, Somers said these skilled artisans who are part of the process should be recognised.

“Only by giving them that visibility can we start to make sure there isn’t exploitation,” she said.

Corruption in the fashion industry is no secret. According to the Uzbek-German Forum for Human Rights, around a million citizens in Uzbekistan were forced to pick cotton by the Uzbek government in 2015. Much of this cotton, however, ends up in Bangladesh, so it is hard to know if your clothing is free of Uzbek cotton.

“That cotton from Uzbekistan is routinely labelled “Made in Bangladesh”. If there’s no transparency down to the raw materials we as consumers can’t know there isn’t slavery behind the cotton we are buying,” said Somers.

“I think the raw materials is still a very serious issue, and I think it’s going to take the best of brands a long time to trace all of their raw materials.”

There’s No Such Thing as Fair Trade Fashion (Yet)