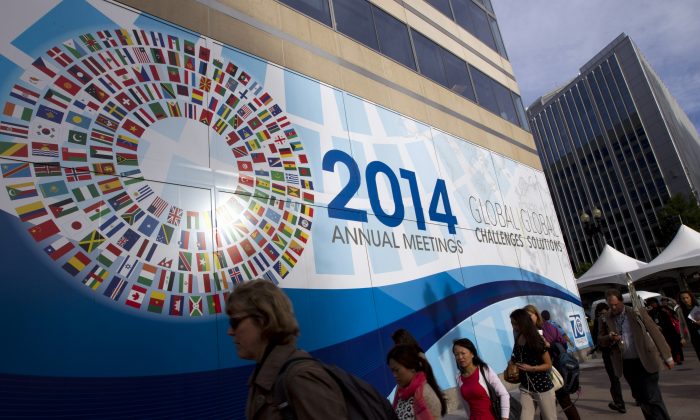 WASHINGTON—Though braced by a resurgent United States, the global economy is under threat from other regions — from Europe and Latin America to China and Japan — where growth is stalling and prospects remain dim.

That’s the bleak picture facing global finance officials who are meeting this week in Washington to consider policies to address the world’s uneven growth. Their meetings follow downbeat assessments of the global economy issued this week by the International Monetary Fund, the Brookings Institution and the Federal Reserve.

The talks began Thursday with discussions among finance ministers and central bank presidents of the Group of 20 nations, which includes traditional powers such as the United States, Japan and Germany and emerging economies such as Russia, China and India. Next will come meetings of the 188-nation International Monetary Fund and its sister lending organization, the World Bank.

In a global forecast prepared for the meetings, the IMF downgraded its outlook this year because Europe is at risk of slipping back into recession and persistent weakness is slowing Japan, China and Brazil. The IMF called the recovery uneven and said global growth this year would be 3.3 percent, one-tenth of a percentage point below its forecast in July. And it lowered its outlook for 2015.

“The world still seems to be counting on riding the coattails of the U.S. economy,” said Eswar Prasad, a Cornell University economist who was among the authors of the report. “That is not going to produce a sustainable recovery.”

Fed officials took note of the weakness in overseas economies and the strengthening dollar at their September meeting, according to minutes released Wednesday. The minutes indicated thatofficials worried that sluggish economies in Europe, Japan and China could depress U.S. exports.

Concerns about Germany’s economy — Europe’s largest — have been mounting. The most recent figures show that industrial production, exports, factory orders and business confidence have all endured sharp declines.

Collectively, the figures raised the risk that Germany could slide into recession. The country is suffering from weak demand for its goods from the rest of Europe and China and from fears about the effect of sanctions imposed on Russia over the crisis in Ukraine.

Four leading think tanks in Germany have slashed their economic growth forecasts to 1.3 percent for this year and 1.2 percent for 2015, down from predictions in April of 1.9 percent and 2 percent, respectively.

“In the face of what we have called the risk of a new mediocre, where growth is low and uneven, we certainly believe that there has to be a new momentum,” she said at an opening news conference.

Europe’s weakness has raised pressure on the European Central Bank, which sets interest rate policies for the 18 nations that use the euro currency, to do more to promote growth and fight low inflation.

Speaking in Washington, Mario Draghi, head of the ECB, said, “We are accountable to the European people for delivering price stability, which means lifting inflation from its excessively low levels, and we will do exactly that.”

The global economy is also facing a threat from the spreading health crisis of Ebola. The presidents of three West African nations made urgent pleas Thursday to the finance ministers for money, hospital beds and doctors. World Bank President Jim Kim said the epidemic could have a “catastrophic” impact on the region if it isn’t quickly contained and it spreads to other countries.

Treasury Secretary Jacob Lew and Fed Chair Janet Yellen are representing the United States at the discussions. U.S. officials said they planned to urge other economies to step up efforts to boost growth and strengthen bank regulations to prevent a recurrence of the 2008 financialcrisis.

“I don’t think the United States alone can pull the global economy to where it needs to be,” Lew told a forum sponsored by the Peterson Institute for International Economics.

The lopsided shape of the global economy has begun to have consequences. The U.S. dollar has strengthened against major currencies, including the euro and the Japanese yen. That trend should help keep U.S. inflation low. But it will help give European and Japanese manufacturers an edge over their U.S. competitors: European and Japanese goods will become more affordable in the United States, while U.S. products will become costlier in Europe and Japan.

The G-20 discussions will end Friday with a joint statement and individual news conferences.Officials have set a goal of boosting global growth by 2 percent within five years, a target that would add $5 trillion to the global economy.

Joe Hockey, the treasurer of Australia, which is chairing the G-20 meetings, said the target was “ambitious but deliverable.” He said the IMF estimates that steps already proposed by individual nations could increase global growth by 1.8 percent. But he conceded that winning funding from lawmakers in each country would be difficult.

“Governments have run out of money,” Hockey said.

“The easy steps in the form of monetary policy that has produced low interest rates have already been taken,” said Sung Won Sohn, an economics professor at the Martin Smith School of Business at California State University. “The tougher steps, such as deregulation and labor market reforms, represent hard political choices that have to be made.”