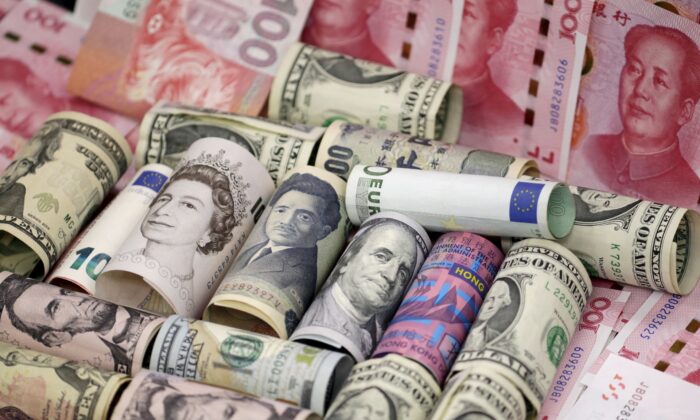 A $100 bill sits among paper notes of the British pound sterling, Japanese yen, and other currencies in this photo illustration in Tokyo on Feb. 28, 2013. (Shohei Miyano/Reuters)
Russia-Ukraine War

Global Economy Could Split Between US Dollar, Other Currencies: IMF Deputy Chief

The Russia–Ukraine War could trigger a fragmentation in global payment systems, deputy head of the International Monetary Fund (IMF) Gita Gopinath said during a March 22 virtual discussion, indicating a possible global shift away from the U.S. dollar.

“What we are seeing around the world is increasing fragmentation of payment systems that probably will further increase following this war,” Gopinath said in the discussion broadcast on the IMF YouTube channel.

“We know that energy trade will never look the same again after this war. And we are likely to see some countries reconsidering how much they hold of certain currencies in their reserves. So, fragmentation is indeed an important concern,” Gopinath said.

However, she added that the sanctions on Russia and related events do not indicate any “imminent demise” of the U.S. dollar.

Gopinath pointed out that currencies tend to have “complementary roles.” For instance, they have a role as an instrument of payment and another role as a store of value.

If some parts of the world start making trade payments in currencies other than the dollar or begin saving in other forms of currency assets, “then we could see pockets where we might see shifts happening,” she added, while noting that the longer the Russia–Ukraine war continues, the greater the impact will be.

As to the economic sanctions slapped on Russia for its invasion of Ukraine, Gopinath said she feels it is “well justified,” and that the effects of these sanctions on Russia’s currency and financial markets are “quite dramatic.”

The IMF will put forward its assessment of the economic consequences of these sanctions when it publishes its biannual World Economic Outlook report in April 2022, the deputy head of the organization stated.

Regarding whether Russia could use cryptocurrencies to evade sanctions, Gopinath said the IMF is yet to have a clear picture about the issue at the present time. However, the organization is “very closely” tracking the matter.

The West’s sanctions on Russia resulted in roughly $300 billion worth of central bank gold and forex (foreign exchange) reserves being frozen. In addition, the European Union has also disconnected seven Russian banks from the SWIFT payment system.

The U.S. dollar made up $7 trillion, or over 55 percent, of the $12.8 trillion in central bank reserve funds as of Q3, 2021, according to data from the IMF. The euro came in second with $2.5 trillion, or just over 19 percent. At $318 billion, the Chinese renminbi accounted for 2.47 percent of global central bank reserves, and is at the fifth spot behind the Japanese yen and British pound sterling.