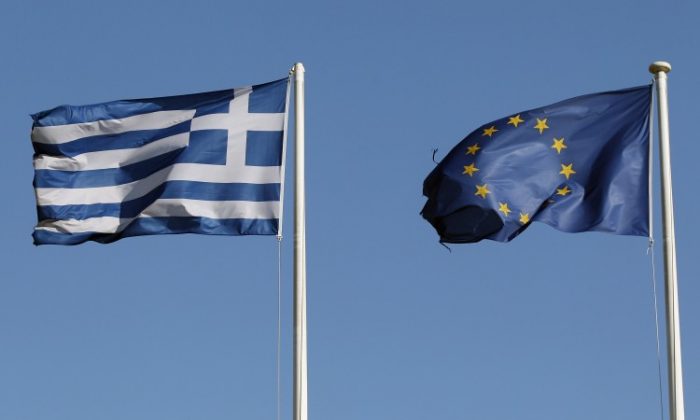 A Greek and an EU flag fly outside the Acropolis Museum on February 19, in Athens, Greece. (Oli Scarff/Getty Images)
Opinion

There are some important moments in a country’s history when a nation is either helped or destroyed—or both.

I believe Greece’s current situation, facing both the European and global economic crisis, is a case of both.

While on a plane ride recently, I sat beside a young blond-haired, blue-eyed woman and we started to chat as seatmates do, about where we were going and where we are from. She is German and I Greek.

Like most people, she was familiar with Greece from the many news reports over the last year and half talking about Greece’s terrible economy, the riots, and how the world has had to come to “save” Greece and its people.

As we kept talking, the questions that everyone wants to ask came up, such as how Greeks are dealing with the crisis, what the situation is really like on the ground, as compared to what’s portrayed in media reports.

I explained a little bit about the situation and then she asked: “I heard Greeks don’t acknowledge the help they are getting from Germany and other European countries.
Is it true?”

I stopped for a while and thought how to answer.

I didn’t want her to think Greeks are only revolutionaries, or that Greeks are negative despite all the help the country is getting, because it’s not true. But on the other hand, I couldn’t explain clearly why the majority of the Greek population indeed doesn’t acknowledge the help. It’s complicated because it involves a variety of ethical, political, theoretical, and personal views.

But it’s true. The majority of Greeks do not acknowledge the help.

But there is more to it. For example, many people feel that the EU could have helped Greece solve its problems a lot earlier, and not waited until now. They saw long ago that the Greek government was not handling the economy well, that corruption was a major issue, and that many Greek politicians were failing to keep their word. Why didn’t they ”save” Greeks from this situation five years ago? All the same problems there are today already existed five years ago.

Another element to the answer comes down to the nature of the “help” the media talks about Greece receiving from the EU and the International Monetary Fund. If you want to feed someone, do you give that person food or teach the person to fish?

Greece does have a lot of resources that a lot of people do not know about that could help Greeks learn to fish. Greece produces many things that managed properly could pay off the debt a lot more quickly than we think.

For example, Greece is the No. 1 country globally for its maritime industry. It is No. 1 in the EU in producing aluminum and bauxite (used for making aircrafts and electrical devices); 46 percent of Western Europe’s magnesium is produced in Greece. Greece has nickel mines, it is the third largest olive and olive oil producer, and we export saffron, asparagus, cotton, and diary products, not to mention a thriving tourist industry.

Greece also has on southern island of Crete energy resources like natural gas and oil. According to the department of Mineral Resources in the Technical University of Crete, the energy resources on Crete could be worth up to 20 billion euro ($26.3 billion) per year for the next 25 years. Greek weather is also perfect for wind power and solar power.

All this combined could be used to pay off the debt as quickly as possible so that Greeks and the people of the world will not have to suffer the effects of this global crisis, not go hungry, and not suffer from depression.

Saving Greece ultimately means helping Greeks use their own goods and thereby save themselves.