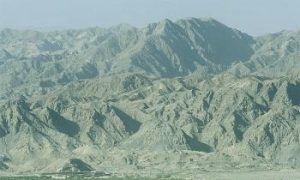 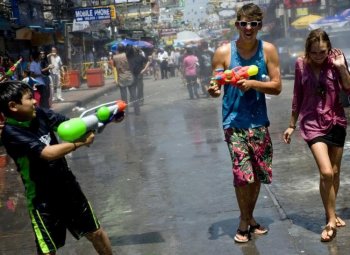 Foreign tourists and a Thai child duel with water guns along a tourist area of Bangkok on April 13 last year during the Songkran festival which marks the Thai New Year. (Manpreet Romana/AFP/Getty Images)
World

By James Burke
Print
BANGKOK—This morning I packed a water pistol (a blue one shaped like a dolphin) into my 3-year-old’s preschool bag as requested by his Thai teachers.

Dressed in his floral shirt (another request) I dropped him at the front of the preschool next to a big bin full of water.

When I picked him up some hours later, he had a weapon upgrade and was clutching a multicolored water blaster that he didn’t want to let go of. The dolphin just didn’t do the job apparently and he was woefully outgunned by his classmates.

This was the first bit of "sanook" (Thai for fun) that I witnessed for this year’s Songkran festival, the celebration of Thai New Year that officially runs from April 13 to 15.

Derived from the Sanskrit language, “Songkran” means passage or move into and it refers to the position of the sun within the solar system. It’s Thailand’s most festive period, akin to Christmas or Thanksgiving in the states.

The water fights derive from a tradition where the younger generation would pour scented water onto the hands of their elders who would offer blessings in return.

At community gathering areas and temples, Buddhist shrines continue to be decorated and are the center points of merit making ceremonies. It also coincides with downtime in rural areas at the end of the rice harvest.

While the older traditions still continue, it’s the water wars—often waged from the back of a pickup truck—and partying on street corners that are the most visible part of the festival, here in Bangkok at least.

Now, being middle-aged, I won’t be jumping out onto the nearest corner armed with a water gun to take on half a dozen Thai adolescents, but we’ll drive through our local neighborhood again to see the fun.

Our car will be squirted with water and bombed with chalk powder, more so if they see a "farang" (Thai for white foreigner) in the car—that being me.

But like most celebrations, modern Songkran has its darker elements, usually centered on excessive alcohol consumption. During Songkran last year, there were over 3,500 road accidents in Thailand with nearly three-quarters involving motorcycles. In just over a third of the accidents, alcohol was to blame. Nearly 10,000 people were caught drunk driving. In short, you could also call it the Thai silly season.

Editorials in Thai newspapers also bemoan the recent rise of hooliganism in what is meant to be a family-oriented festival.

Meanwhile what I’ve experienced or seen over the past two years during Songkran has included political violence in what has become a divided country.

On Sunday, tens of thousands of red shirt anti-government protesters again demonstrated in the Thai capital. This time they rallied for the one-year anniversary of the violent clash between protesters and the military in the city’s historic quarters that left 25 people dead.

Last year’s crisis didn’t end until mid-May and when it did, it did so with more bloodshed. Hopefully 2011’s Songkran will be different and the only thing spilt on Bangkok streets will be water.