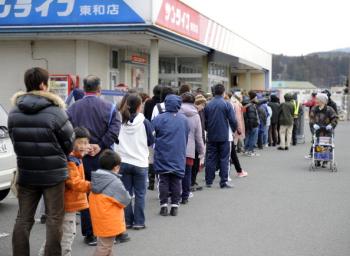 Customers queue up outside a supermarket to buy food, in the city of Hanamaki in Iwate prefecture on March 15, as the country struggles to cope following the March 11 earthquake and tsunami disasters. (Toshifumi Kitamura/AFP/Getty Images)
Opinion

Genevieve Belmaker
biggersmaller
Print
NEW YORK—When I was 15 years old, I met Japanese people for the first time in my hometown of Olympia, Wash. I remember them being polite to a fault, graceful, and intelligent. They were exchange students staying with my best friend’s family for two weeks, and I spent most of those two weeks of my precious summer vacation with them. By the end of the summer, I had decided to enroll in Japanese class at my high school and learn the language of my newly discovered country and its people.

Over the next three years, because of my hometown’s location on the Pacific Rim, I came into contact with Japanese people many times. By age 25, I would live, study, and work in Japan three times with host families, immersed in the almost tribal culture of a country that brings meaning to the antiquated phrase “mystery of the orient.”

It is a country I have come to know intimately and respect on a very deep and profound level. Even though Japan has been heavily influenced by the West and America in particular, it is a place with a fascinating talent for taking whatever it likes and owning it.

When I was still in high school, an exchange student visited my Japanese class during my junior year. The student, Oba, has remained a close friend to this day. I have watched the progression of his life from a young college student to a professional, married workingman with a wife and three beautiful children. Oba and his family live in Chiba Prefecture, and they were my first thought when I heard about the terrible earthquake, tsunami, and nuclear reactor explosions. They are the only ones among my Japanese friends who I thought were in danger, and I searched frantically for information about them last Friday when the news first came out.

Over the weekend, I heard from Oba, telling me that he and his family were safe, but I could tell he was distraught by what had happened. “The disastered area looks devastated and so many people are dying by tsumani and fire,” wrote Oba in his message to me sent through LinkedIn. It was the only way we could get in touch. I could tell he was relieved to be safe, but alarmed that his country had been struck by such a disaster.

But the Japanese are known for their restraint and poise under the worst of conditions, and that’s what I really read between the lines in my friend’s e-mail. After World War II, no longer an imperial dynasty and thoroughly broken and defeated, the country bonded together like a self-protective clan and remade their nation from scratch. I am not a student of history, but I believe it is one of the most remarkable successes of modern times. From a defeated enemy, Japan rose to be a world superpower, the third largest economy in the world, and earned its rightful place at the table of powerful nations. How many modern countries can the same be said of?

Epoch Times staff in Japan report that at the supermarkets over the weekend, where people were hurrying to stock up on food and water to prepare for unpredictable power outages, Japanese remained characteristically courteous and orderly. Everyone lined up with their purchases, nobody bought more than they thought they needed, and there were no reports of chaos or looting, as seems to happen in most other disaster scenarios.

So on Monday morning it bothered me immensely to see a front page newspaper photo of a devastated Japanese landscape, with one lone woman, half-dressed and sitting on top of a destroyed home, weeping inconsolably. The misery must be beyond comparison for the people who lost homes and loved ones and entire towns. But the core of the Japanese spirit is far stronger than an iconic image of a lonely victim in a landscape of rubble.

The Japanese people will, and are, bonding together as a nation. They will recover and rebuild—and probably make things even better than before. Their defining characteristic in this moment is not their suffering, but their strength.