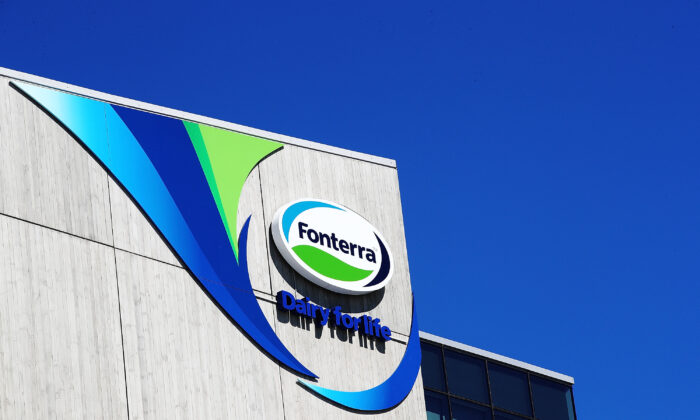 A general view of the Fonterra buildin is seen in Auckland, New Zealand, on Dec. 1, 2017. (Hannah Peters/Getty Images)
Australia

The world’s largest dairy exporter Fonterra has announced it will not sell its Australian business after reporting increased profit and revenue for the past financial year.

At an investor briefing on Sept. 22, Fonterra CEO Miles Hurrell confirmed the company’s decision to retain full ownership of its Australian assets, saying it was the best path forward for growth and return on investment.

“We’ve looked at a number of options for our Australian business and have decided that it’s in the co-op’s best interest to maintain full ownership,” he said.

“Australia plays an important role in our consumer strategy with a number of common and complementary brands.

“The business is going well, and it will play a key role in helping us get to our 2030 strategic targets.”

The announcement was made following reports of growth in the 2021-2022 financial year despite many challenges, including supply chain disruptions, higher costs and inflation, as well as fallout from protests in Sri Lanka.

Specifically, the company’s revenue increased by 11 percent to NZ$23.4 billion (US$13.64 billion) during the year.

The company also paid out a record farmgate milk price of NZ$9.30 per kilogram.

Previously, Fonterra, which is owned by over 10,000 New Zealand farmers, started a review of its Australian businesses in 2021 and considered selling part of its stake as the company wanted to refocus on its home market.

However, the growth in profits, which Hurrell said was due to robust demand and higher dairy prices in the United States and Europe, compelled the leadership team to back away from the plan.

In addition, the company announced that it would delay the return of NZ$1 billion to shareholders from the initial deadline of 2024 to 2030 so that it could retain the Australian business.

“Even though we have decided not to sell a stake in our Australian business, we are still committed to targeting a significant capital return to our shareholders,” Hurrell said.

In the short term, Fonterra believes its 2022-2023 financial year performance should be strong as lockdowns in China ease, and political tensions in Sri Lanka dissipate.

“We continue to monitor a number of risks. The strength of our balance sheet means we remain in a strong position to weather uncertainty and market volatility,” Hurrell said.