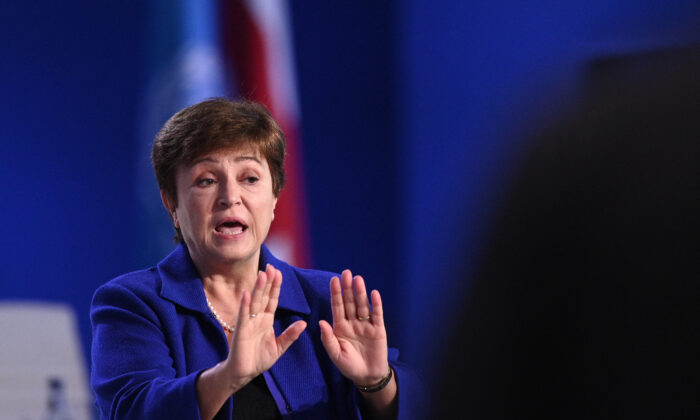 Global debt is at such a high level that a worldwide cooperative approach is needed to tackle the danger, according to Vitor Gaspar, director of the International Monetary Fund’s (IMF) fiscal affairs department, and Ceyla Pazarbasioglu, the organization’s strategy chief.

Data from the IMF’s Global Debt Database shows that borrowing rose by 28 percentage points to 256 percent of gross domestic product (GDP) in 2020, Gaspar and Pazarbasioglu wrote in an IMF blog post on April 11. Roughly half the debt was accounted for by governments, with households and nonfinancial corporations making up the rest.

Public debt is now roughly 40 percent of total worldwide debt, the highest such level in about 60 years. Debt accumulation and deficits rose at a greater speed during the pandemic than in the early days of the global financial crisis of 2007–2009 and the Great Depression, they said.

Only a small share of the debt increase was accounted for by developing nations and emerging markets, not including China. But roughly 60 percent of low-income nations were at risk of distress, the post said.

The IMF predicts debt restructurings to become more frequent. As such, having mechanisms to ensure orderly debt restructuring would be in the best interest of both debtors and creditors. A “global cooperative approach” is necessary to make sure there is an orderly resolution of debt problems and unnecessary defaults are avoided.

The rise in energy and food prices is adding more pressure on poor and vulnerable nations. Food makes up about 60 percent of household consumption in low-income nations. Moreover, emerging and low-income nations face persistent revenue and GDP losses.

In advanced economies, the IMF expects spending, revenues, primary balance, and economic activity to return to near pre-pandemic levels by 2024. However, there has been a significant increase in the number of advanced economies with debt ratios exceeding their economic size, the IMF stated.

Due to the rising inflation, central banks around the world are raising interest rates to contain price hikes, which can end up tightening global financial conditions, the agency stated.

Considering risks such as the COVID-19 pandemic, high debt levels, and surging inflation, Georgieva predicted that 2022 would be like “navigating an obstacle course.” She pointed out that the problem of inflation is unique to each nation.

“That country specificity is what makes 2022, in a way, even more difficult than 2020,” Georgieva said.

“In 2020, we had similar policies everywhere because we were fighting the same problem—an economy in standstill. In 2022, conditions in countries are very different, so we cannot anymore have the same policy everywhere, it has to be country specific and that makes our job in 2022 so much more complicated.”