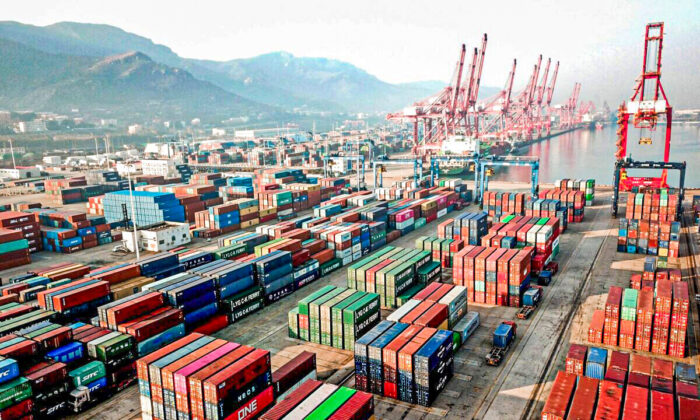 This aerial photo shows containers stacked at a port in Lianyungang in China's eastern Jiangsu province, on Dec. 7, 2021. (STR/AFP via Getty Images)
Economy

Global container freight rates have been falling since March, and the Freightos Baltic Index (FBX) has nearly halved in the past six months.

The third quarter of each year is the traditional peak season for freight. However, this year, the freight industry has experienced a downshift due to global inflation, weakened economic outlooks, and shrunken demand.

FBX is a leading composite index issued by the Baltic Exchange and Freightos that provides daily container freight rates on a global scale.

Likewise, the China Containerized Freight Index (CCFI) has experienced an overall decline of nearly 20 percent since the beginning of the year and continued to decline in September.

“The primary reason is that the poor economic outlook and recession expectations have led to lowering demands as the future is uncertain. In addition, the global interest rate hikes have also caused companies to reduce business,” Albert Song, a senior Chinese financial analyst, told The Epoch Times in response to the declining global containerized freight rates.

“Based on past data, we are now in the peak season for export trade, but China’s foreign trade data shows that exports are much lower than expected, indicating that demand in European and American countries has decreased and consumers have reduced spending. This state will likely continue until next year.”

The declining figures showed shrinking demand in both the American and European markets.

According to an analysis from Guotai Junan Securities, a leading Chinese investment bank, the U.S. Federal Reserve’s (Fed) interest rate hikes will keep external demand down, and the expectation of a global recession will suppress bulk prices. The securities company said the country’s export growth would be under significant pressure after peaking in the prospect of both prices and volumes.

U.S. investment firm Goldman Sachs has recently lifted its forecast for the Fed’s interest rate hikes, according to Bloomberg. The group now expects the Fed to raise the interest rates by 75 and 50 basis points in September and November, respectively.

In addition, the U.S. lender predicts that the Fed will raise interest rates by 25 basis points in December, with the possibility of raising rates further next year.

On Sept. 8, the ECB announced that it would raise three key interest rates by 75 basis points, the largest rate hike in the Bank’s interest rate history. Additionally, Eurozone’s annual inflation is expected to be a record 9.1 percent, according to an August estimate from Eurostat, the statistical office of the European Union.

Europe is currently experiencing an energy crisis. The price of natural gas last year was five times that of the United States, and this year it has increased to seven times.

Heavily impacted by the soaring cost and shortage of energy, many in energy-intensive industries such as steel, chemicals, and fertilizers producers have to cut production, stop work, or even close down.

“The energy crisis has a certain impact. After all, 40 percent of social commodities are related to oil. But from the perspective of shipping, it is not a decisive role, mainly due to the decline in demand,” Song said in response to the impact of the energy crisis on shipping.