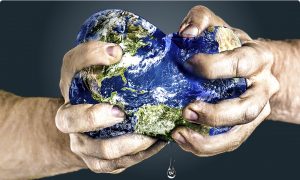 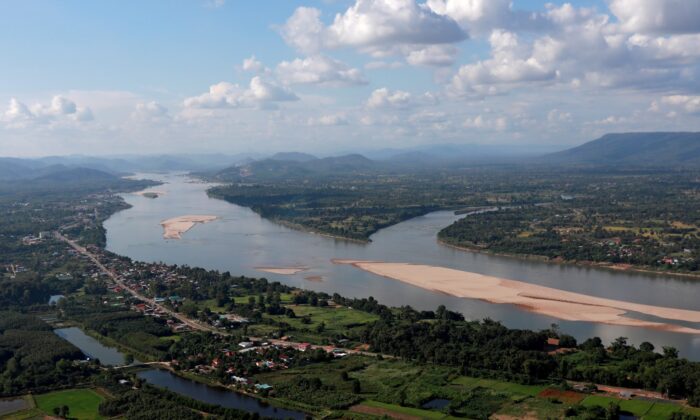 A view of the Mekong river bordering Thailand and Laos is seen from the Thai side in Nong Khai, Thailand, on Oct. 29, 2019. (Soe Zeya Tun/Reuters)
Thinking About China

Water is replacing oil as the strategic natural resource of the 21st century. China is fortunate that the Qinghai-Tibet Plateau, known as the third pole of the world and also called the “Water Tower of Asia,” is situated within its borders. However, the Chinese regime has ignored the U.N.’s international water laws and has weaponized water resources to gain control and intimidate other countries.

The Mekong River was once one of the richest water resources on Earth. It originates from the Lasagongma Spring, which is a glacial stream in the Tibetan Plateau, and flows through China, Laos, Thailand, Cambodia, Myanmar, and Vietnam, before eventually flowing into the South China Sea. The Upper Mekong Basin is known as the Lancang River in China. Known as the “Danube of the East,” it has now become a political bargaining chip for the Chinese Communist Party (CCP) to control Southeast Asia.

The 11 dams built by the Chinese regime in the upper Lancang River basin have severely affected the Mekong River, threatening the livelihood of 70 million people. On Feb. 12, the Mekong River Commission (MRC), made up of four countries—Thailand, Laos, Cambodia, and Vietnam—issued a statement saying that the fluctuating river flow has fallen to “worrying levels” and that the dams built by China were part of the reason.

However, on June 8, at the sixth Lancang-Mekong Cooperation (LMC) Foreign Ministers’ Meeting held in Chongqing, China, five countries—Cambodia, Laos, Myanmar, Thailand, Vietnam—reached a consensus on publishing the “Initiative on Deepening Cooperation among Local Governments of Lancang-Mekong Countries” with China.

Why are these five countries submissive to the CCP? Because they’ve been shortchanged. In 2010, Thailand, Laos, Vietnam, and Cambodia spoke out against China over the severe drop in water levels of the Mekong River, believing that Chinese dams on the Lancang River caused the downstream drought. However, the CCP denied the accusation and ignored the drought in the Mekong River basin. Yet, in 2016, Vietnam experienced a severe drought from the reduction of river water volume, leading to some coastal areas experiencing seawater intrusion.

In an unusual move, the CCP reached out to Vietnam and provided them with water from the Jinghong Hydropower Station in China’s Yunnan Province, through the downstream Mekong River from March 15, 2016, to April 10, 2016. These two incidents indicate that the CCP has controlled the Mekong River’s faucet.

On April 11, 2020, a research study published by Eyes on Earth Inc., a U.S. research and consulting company specializing in water resources, confirmed the fact.

The company collected satellite data obtained by the Special Sensor Microwave Imager/Sounder (SSMIS) to detect the upstream rainfall and snowmelt of the Mekong River basin in China from 1992 to the end of 2019. The data were then compared with river-level readings by the MRC at Thailand’s Chiang Saen Hydrological Station, the closest station to China, to create a predictive model of natural levels for the river. The study focused only on waters flowing out of China and didn’t look further downstream.

In the early years of the data, the predictive model and the river level measurements matched closely. But starting in 2012, when China’s upper Mekong hydropower dams began operating, the model and the river level readings started to diverge, coinciding with periods when the Chinese dams’ reservoirs filled up during rainy seasons and released water during the dry season. The difference was especially pronounced in 2019. Although China dismissed the findings, arguing that Yunnan Province saw a series of droughts in 2019, the satellite data shows otherwise.

The Yarlung Zangbo River originates from the Chemayungdung Glacier at the northern foot of the Himalayas. The mainstream is more than 1,300 miles long, of which the river in Tibet is more than 1,270 miles long. It flows from Tibet into India, where it becomes the Brahmaputra, the second largest river in India by discharge, before flowing into Bangladesh as the Jamuna. The Jamuna joins with the Ganga in Bangladesh and flows out into the Bay of Bengal, forming the largest river delta in the world.

As the highest major river on Earth, running at an average elevation of more than 13,000 feet, the Yarlung Zangbo River forms a more than 6,560-foot drop within a straight line distance of 31 miles in the lower reaches of the Great Bend area. This brings nearly 70 million kilowatts of potential hydroelectricity, an energy scale three times greater than that of the Three Gorges Dam, which has the capacity of hundreds of thousands to 1 million kilowatts.

Due to the abundant water resources of the Yarlung Zangbo River, there have been voices within the CCP calling for the construction of dams to draw the river into the Yellow River basin. It would serve as an important part of the South-to-North Water Diversion Project to alleviate the water shortage in China’s northwest region. On May 25, 2009, under international pressure, then-Water Minister Wang Shucheng expressed that Beijing had no plans to divert the Yarlung Zangbo River to the Yellow River.

The CCP has long wanted to develop hydroelectricity in the lower reaches of the Yarlung Zangbo River, where construction is already underway on its middle reaches. In the Gacha Canyon section alone, five dams will be built on the more than 23-mile river. Among them, the Zangmu Hydropower Station began operation in 2014. The highest roller-compacted concrete gravity dam in the world, the Dagu Hydropower Station, was said to be producing power on May 24. However, this mammoth dam has caused grave concern for years over the geological volatility of the area, fragile ecosystems, incalculable consequences of the project, and India’s control of the southern Tibet region intertwining with Sino-India territorial disputes.

The aforementioned two examples show that the CCP is playing politics and weaponizing water. A few years ago, professor Brahma Chellaney, from Strategic Studies at the New Delhi-based Centre for Policy Research in India, pointed out in his book “Water: Asia’s New Battleground” that the CCP has become more and more accustomed to taking unilateral actions in terms of water-resource utilization and dam construction. Beijing deliberately avoids any legally binding commitments on water resources and refuses to resolve neighboring countries’ concerns.

The CCP has its fallacy in this regard, asserting that China has a legitimate right to develop hydroelectricity in Chinese territory and ignores the laws that resolve conflicts. It has reservations to arbitration clauses and judicial settlements in most international treaties that have been signed, ratified, or joined.

The CCP hasn’t signed or joined existing multilateral treaties with other countries, nor has it established or joined the corresponding multilateral river basin management institutions or the integration of the whole river basin development treaties, plans, and institutions. This fully demonstrates that the CCP hasn’t adopted cooperative or legal means on international water resources issues, but has avoided making any substantive commitments.

The form of weaponizing water resources includes not only hydropower development and volume control, but also transnational water pollution prevention, biodiversity protection, emergency response, and maintenance of the river basin’s ecological safety. In particular, the consequences may be devastating if the CCP weaponizes water from a political or even military perspective.

Therefore, countering the CCP’s water weaponization has become a priority. On Sept. 11, 2020, the United States launched the Mekong-U.S. Partnership with Myanmar, Cambodia, Laos, Thailand, and Vietnam. Then-Secretary of State Mike Pompeo called the partnership “an integral part of our Indo-Pacific vision and our strategic partnership with ASEAN.”

To support this partnership program, the United States decided to invest more than $150 million to countries in the Mekong River basin in recovering losses from the COVID-19 pandemic, combating transnational crimes, and developing energy and power markets. This support was built on the basis of the $3.5 billion financial aid through the Lower Mekong Initiative and other projects that the United States has provided to the region since 2009.

On Jan. 12, the United States and Vietnam co-hosted the first Friends of the Mekong Policy Dialogue under the new Mekong–U.S. Partnership. Participating countries and institutions, including Australia, the European Union, Japan, South Korea, New Zealand, the Asian Development Bank, the World Bank, Brunei, ASEAN Secretariat, and the Mekong River Commission, were in support of a secure, prosperous, and open Mekong region. In addition, India, Japan, Australia, and other countries have also increased their investment in the Mekong region to counter the CCP’s water weaponization.

The CCP more or less condemns most of the countries that share water resources with China. Countering the CCP is a critical challenge for every nation and the international community.