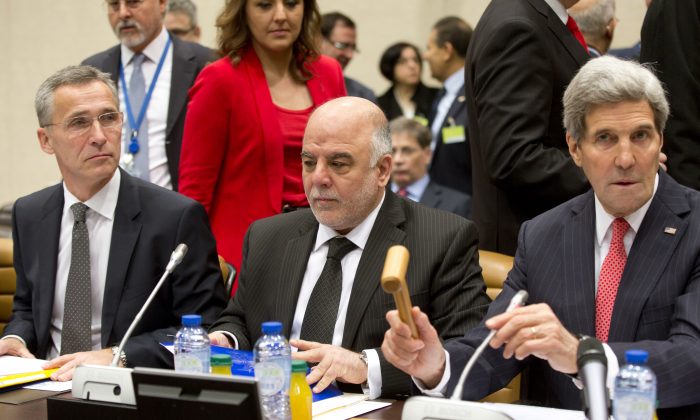 U.S. Secretary of State John Kerry (R) hits the gavel as he presides a meeting as Iraqi Prime Minister Haider al-Abadi (C), and NATO Secretary General Jens Stoltenberg attend the round table meeting of the global coalition to counter the Islamic State militant group at NATO headquarters in Brussels on Wednesday, Dec. 3, 2014. Kerry opened on Wednesday a high-level meeting at NATO headquarters of countries participating in the campaign against the Islamic State organization to assess what’s been accomplished and what remains to be done. (AP Photo/Virginia Mayo)
Middle East

BRUSSELS—Islamic State militants invaded Iraq’s west almost a year ago and overran the nation’s second-largest city in June, threatening death and torture to opponents in their way. But the world has been slow to respond, coming together Wednesday for the first high-level meeting of scores of nations now devoted to destroying the rampant insurgency.

The delay resulted from a succession of diplomatic disagreements and political snags, beginning with the very presence in power of the former Iraqi prime minister. Nouri al-Maliki remained in office, fueling widespread anger that, in turn, fed the Islamic State group. Not until right before al-Maliki stepped down in August did the United States and its allies strike back at the Islamic State group with a bombing campaign that has so far numbered more than 1,000 attacks. By that time, al-Maliki was seen as a lame-duck leader whose days in power were numbered.

But confusion and feuding among the allies — ranging from what support each nation was willing to give and how, to the overarching goal and result of the effort — also hobbled the international response.

Top diplomats attending Wednesday’s meeting of at least 60 counties and international organizations acknowledged the slow start but said the coalition against the Islamic State is quickly getting up to speed.

One U.S. official described it as “the end of the beginning” of the war against the militants and noted near-unity on a number of fronts, including support for the new government in Baghdad, stopping foreign fighters from reaching battlegrounds in Iraq and Syria and the need for a political transition in Damascus that, potentially, could include the ouster of Syrian President Bashar Assad.

“We recognize that hard work remains to be done,” U.S. Secretary of State John Kerry told the diplomats gathered at the start of the meeting, held at NATO headquarters in Brussels.

He said “the rise of Daesh was rapid” — using an Arabic acronym for the Islamic State — and that the coalition’s success so far “has left those terrorists very exposed.”

“What was relatively easy for them last summer has become more difficult,” Kerry said.

Since then, Kerry said, the militants have been unable to easily travel and have seen their lucrative oil resources and command centers attacked. It also has been unable to wrest control of the Syrian border town Kobani from Kurdish rebels — a fight that it was poised to win just six weeks ago.

In the short term, the Iraqi government has yet to approve the creation of a national guard that will be comprised of the troops of the same religious sect or ethnic group that they are tasked to protect. This is seen as a necessary step toward soothing Sunni Muslims in in the nation’s north and west, where the insurgency gained a stronghold by tapping into their anger against al-Maliki and his Shiite-dominated security forces.

A senior State Department official said the U.S. has already helped train an estimated 2,000 fighters — most of them Sunnis from Iraq’s western Anbar province — to serve as a stopgap security force until the federal parliament in Baghdad creates the new guard units.

Iraq’s new prime minister, Haider al-Abadi, told diplomats in Brussels that “we’re the only country in the Middle East who is really fighting Daesh on the ground” but pleaded for more help.

“This is the most criminal organization that has committed atrocities in Iraq and in the region, and they are able to commit others,” said al-Abadi. “And we have to stop them.”

Al-Abadi also announced that Iraq will formally ask NATO to help improve its military capacities, NATO spokesperson Oana Lungescu said. The request will have to be reviewed by representatives of NATO’s 28 member nations, she said.

Baghdad has been asking for help in fighting the Islamic State for at least two years, going back almost to December 2011 when the U.S. withdrew its military from Iraq. But until last summer, when militants seized the northern city of Mosul, threatened to overrun the Kurdish capital of Irbil and sought to exterminate minority Yazidis, the Obama administration refused to intervene beyond selling more weapons and other equipment to Iraq.

But more recently, including Vice President Joe Biden’s trip to uneasy ally Turkey two weeks ago, Washington has been able to convince foreign skeptics that it is committed to defeating the insurgency, James F. Jeffrey said. Now, “it is all going on the right direction,” said Jeffrey, who served as ambassador to Iraq from 2010 to 2012.

Turkey has been a hard sell, but Turkish President Recep Tayyip Erdogan agreed to host a training camp and help equip some moderate Sunni fighters to combat the Islamic State in Syria. Saudi Arabia and Qatar also have pledged to help train fighters.

Under an agreement issued by the coalition Wednesday foreign ministers representing coalition nations will meet at least every six months in what all agree will be a years-long campaign against the Islamic State. In addition to supporting the Iraqi government and urging access to humanitarian aid in Syria, it also called for greater help to countries in the region that have been saddled with millions of refugees from the battle zone.

As he headed into the meeting Wednesday, Danish Foreign Minister Martin Lidegaard said the global coalition has made significant headway against the Islamic State, including stemming its financial support. Most importantly, he said, the militants’ deadly march across the region has been halted.

But the insurgency’s defeat will take time, Lidegaard said.

“There’s definitely a big, big job ahead of us,” he said.