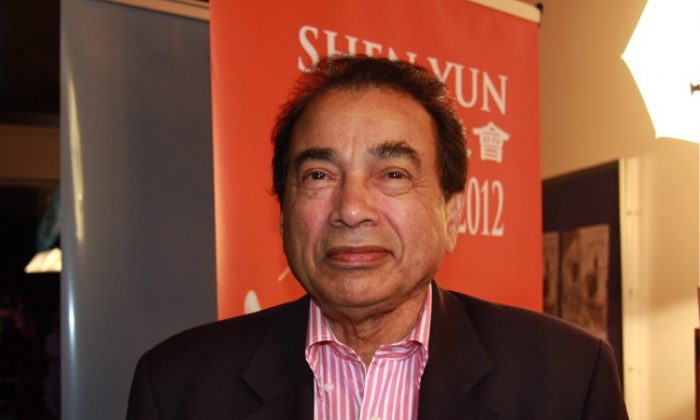 CANBERRA, Australia—Captain Eric Weinman, who has been honoured in the field of humanitarian charity work, was at the Canberra Theatre on Wednesday evening, April 18, to see Shen Yun Performing Arts New York Company present its dazzling performance of classical Chinese dance and music. Mr. Weinman said the performance was “something very special.”

Eric Weinman is the founder, executive director and president of the FEPCOW Charity Project, a non-profit organisation that was founded in memory of Eve Weinman, Mr. Weinman’s late wife, who had a lifelong dedication to charity. The global charity organisation helps thousands of underprivileged, poor children, young adults, and destitute aged people.

Mr. Weinman said after the show: “It’s very spectacular; the coordination and the perfect harmony, and the music is quite exciting.

“I must say, it is a great colourful extravaganza. It is really, really something that I hope people will never miss, because it’s something very special.”

“Classical Chinese dance is at the heart of the performance, along with brilliant costumes, breathtaking projection, and an orchestra that combines both classical Western and Chinese instruments,” states the company’s website.

“The Chinese culture has got a tremendous … history, and things that have happened in the country … and, of course, [Shen Yun] has captured it very cleverly … it’s quite impressive and very cleverly thought out because there’s a big story behind it all, it’s not just dancing,” Mr. Weinman said.

Shen Yun transverses the globe delivering classical Chinese culture, which was profoundly influenced by Confucianism, Buddhism, and Taoism. Traditional Chinese culture promotes values such as benevolence, righteousness, propriety, wisdom and faithfulness, and respect for the divine.

Mr. Weinman said: “It’s tremendous! How [Shen Yun] have captured it in such a wonderful musical performance. It’s quite spectacular.”

He said he believed that in our society today, these values and great virtues are still important. “We need to know about all these things. Otherwise we will live in a desert and will die without knowing anything! So it is so important!

Being enamoured by the New York-based company’s performance, he said he would recommend the show to his large network of friends and colleagues.

“I will send emails to my friends and relatives in other parts of Australia to watch out for the performance in their state. … I’ve got a big family scattered all over of professional people … all over Australia, so I will be sending the message around” to go and watch the show.

He concluded by saying, “Please, come again, to Australia and Canberra, in particular. We enjoy the show.”