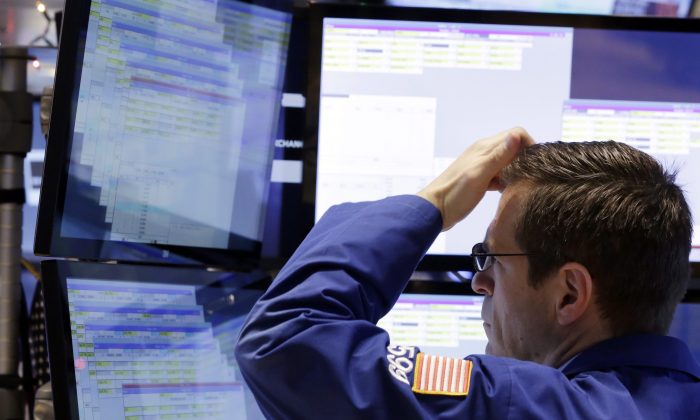 A trader works at his post on the floor of the New York Stock Exchange in this undated photo. (Richard Drew, File/AP photo)
Markets

Since hitting their peaks last year, stocks and bonds have been hemorrhaging amid soaring inflation, rising interest rates, and war in Eastern Europe.

The leading U.S. benchmark indexes are deep in the red year-to-date. The Dow Jones Industrial Average has slumped about 6.3 percent, the Nasdaq Composite Index has plunged about 17 percent, and the S&P 500 has tumbled nearly 10 percent.

The Bloomberg Global Aggregate Index, a benchmark for government and corporate debt total returns, shed 4.9 percent in April, the biggest monthly decline since it first launched in 1990. After hitting a top in 2021, the index has lost about $2.6 trillion.

“Bond investing, in general, has been very unpopular recently, both in the U.S. and globally, with the ratio of bond to stock ownership worldwide at its lowest point since 2008,” he told The Epoch Times.

“It’s not just U.S. government bonds which are out of favor. If you look at charts of emerging-market bond funds including LEMB, ELD, PCY, and TEI, those are all trading near 2-year lows.”

Indeed, Bank of America data show that the average weekly outflow of investment-grade and high-yield bonds had been about $20 billion in March, compared to $25 billion in equities.

Over the past two years, investors had been pouring into equities as interest rates were near zero and trillions of dollars worth of fiscal and monetary stimulus were pumped into the financial system. This led traders to think that they didn’t need “boring” bonds, Kaplan added.

“People were convinced that they could remain Bogleheads forever, keep piling into large-cap U.S. growth stocks, and ‘easily’ make 15 percent or 20 percent each year,” he said. “Many investors have completely forgotten about bonds and their critical role in diversifying any portfolio.”

Market analysts are split if the selloff has peaked or if there is more room for declines.

The bond market is unlikely to continue enduring a “wreckage,” according to Saria Malik, chief investment officer at Nuveen, the asset manager of TIAA.

“Investors aren’t used to seeing dramatic losses in their bond portfolios, particularly when equity markets are also declining sharply,” Malik wrote in a research note to clients on May 2, adding that investors could begin witnessing value from the slump.

Looking ahead, the performance of the global bond market for the rest of the year and in 2023 will be primarily “policy dependent,” says Thomas Urano, principal and managing director at Sage Advisory Services, an Austin, Texas-based investment firm.

“Our base case is economic growth slows faster than the Fed can raise rates, which suggests rates may have outpaced the Fed,” he told The Epoch Times. “However, it’s prudent to remain cautious in the coming quarters. Recession risk and quantitative tightening by the Fed could lead to a short-term spike in bond market risk premiums in 2H22.”

However, the silver lining in all of this is that negative-yielding bonds could be a thing of the past, Urano noted.

“Globally rates are rising and yields are looking attractive for a variety of investor types,” he said.

Still, is this the worst time to own stocks and bonds?

Billionaire hedge fund manager Paul Tudor Jones believes the current environment for financial assets is terrible, telling CNBC that the Federal Reserve has “inflation on the one hand, slowing growth on the other, and they’re going to be clashing all the time.”

“I think we’re in one of those very difficult periods where simple capital preservation is, I think, the most important thing we can strive for,” he added. “I don’t know if it’s going to be one of those periods where you’re actually trying to make money.”

Many experts agree that there is plenty of uncertainty surrounding monetary policy if there is little growth and above-target inflation amid the tightening cycle.

Meanwhile, the Federal Reserve raised its benchmark interest rate by a half-percentage point on May 4 and signaled further large rate increases ahead. The central bank said the move will boost the target range for the federal funds rate to between 0.75 percent and 1 percent.

The Fed also outlined a process to reduce its $9 trillion balance sheet, made up mainly of Treasury and mortgage bonds.

The Bank of England (BoE) also is poised to raise its benchmark interest rate to its highest level in 13 years on May 5. At the same time, BoE chief Andrew Bailey signaled that the organization will employ a juggling act between fighting price inflation and averting recession risks.