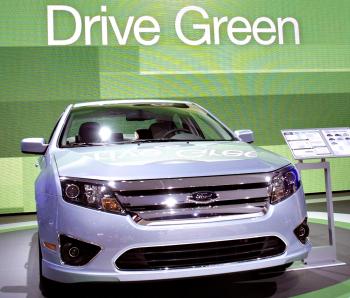 A Ford Fusion hybrid car is displayed at the North American International Auto Show January 11, 2010 in Detroit, Michigan. Over 700 vehicles, including 60 new models, were exhibited at the auto show. (Photo by Bill Pugliano/Getty Images)
Business & Economy

“2010 holds considerable promise for the embattled region [of North America]. Dramatic industry restructuring throughout every level of the value chain has delivered most surviving entities to a leaner and more agile state,” PricewaterhouseCoopers LLP (PwC) said in a recent news release.

When considering the dilemma facing the auto industry a year ago, industry experts agree that it—as a whole—escaped a hard landing. While governmental intervention was needed, the industry seems to be on the mend.

“The auto manufacturing sector is considered by many as simply too important to be allowed to fail—especially during periods of recession,” said Calum MacRae, auto expert at PwC in the report.

Moody’s, in its Automotive Corporate January Review, suggests that the worst is behind the automotive industry and the associated parts suppliers.

“But the climb is just beginning and the hole is pretty deep,” Moody’s said. “In another three to six months we should have a better idea if the ladder of improving U.S. demand is holding up, and if the operating and financial muscle of the sector can sustain the climb.”

The auto industry may have bottomed out and there’s light at the end of the tunnel, predicts Moody’s. Last December, U.S. auto sales increased by 15 percent to 1.03 million over the same month in 2008.

Globally, sales are expected to increase as well. Vehicle sales in South Korea, having taken a nosedive of 24 percent last year despite tax breaks in the local market, is expected to show a marginal increase of 5 percent.

Predictions for Japan’s auto industry are still up in the air, especially after the recent recalls by Toyota Motor Corp., the world’s largest automobile maker.

India is seen as a rising star in Asia with respect to auto sales, mainly due to domestic demand, and is expected to increase output and sales by roughly 8 percent.

Alas, auto sales in the European Union and Eastern Europe will continue to be in a slump during 2010, mainly because Germans are expected to curtail their car buying sprees. PwC suggests that European car sales will decrease by roughly 1 million cars in 2010 over the prior year.

Eastern Europe can’t fall much lower, as it produced roughly 50 percent fewer cars in 2009 over 2008. Predictions are that it will not stagnate any further and 2010 will be a modestly better year.

Toyota’s recall may just be the tip of the iceberg, and other automakers may follow suit, suggests a Knowledge @ Wharton (KW) article, and in the long run may affect sales of other car manufacturers.

The article argues that many automakers use the same suppliers for their auto parts and at the same time they are using many of the components in their different models. So, a domino effect could ensue.

“Carryover parts are quality-proven as individual components,” said Matthias Holweg, director of the Center for Process Excellence and Innovation at the University of Cambridge in England, according to the KW report. “But when they are used in a wide range of different vehicles, they may become causes of quality problems. It is a double-edged sword.”

Globally, automakers are attempting to wrestle market share away from Toyota as the Japanese giant reels from a string of recent gas pedal recalls as well as its latest brake recall on Prius hybrids.

Volkswagen AG (VW) is hoping that Toyota’s recent negative publicity will give its sales a push. It announced that by 2018 it hopes to produce 10 million new vehicles and achieve a return of more than 16 percent of its investment.

The company is pushing for a 5 percent profit margin this year, which does not yet include the Porsche production, as it will not be integrated within VW until 2011.

“With the implementation of ‘Strategy 2018,’ the Volkswagen Group is seeking global economic and environmental leadership in the automotive industry by 2018,” VW said in a published February statement to investors.

Toyota estimated that the cost of the recall would shave off roughly $1.1 billion of its income this year. The recall affected sales, with a 16 percent decline of sales by the end of January, while GM’s sales increased by 15 percent during the same period, according to KW.

Ford did not accept a government handout. It went at it alone and according to industry reviews is succeeding admirably. Customer satisfaction with Ford cars is high and the company, after extensive internal restructuring, training, and eliminating barriers to a cohesive workforce, is making a mark on the industry.

“We were in real trouble, but we came back from that … It really feels good here at Ford now. We’re not out of the woods yet, but we’re starting to see some momentum,” said Bill Ford during a recent interview with the McKinsey Quarterly.