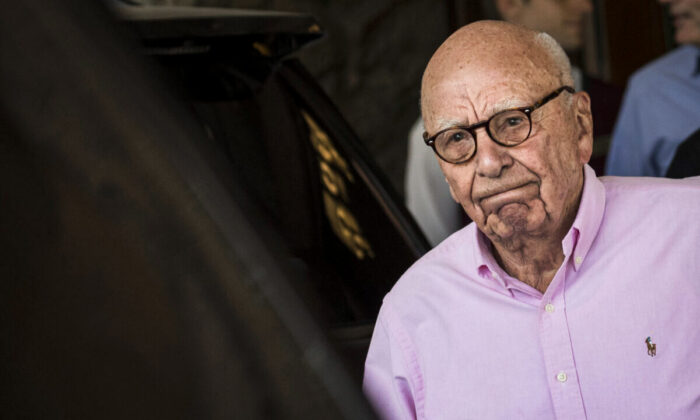 Rupert Murdoch’s media company was targeted after a climate activist group said his newspapers treated the current heatwave as an “upbeat story.”

At 6:30 a.m. on Tuesday, two people from Extinction Rebellion (XR) smashed two windows at the entrance of the News UK building at London Bridge.

Four others sprayed “tell the truth” and “40 degrees = DEATH” on the front of the building and pasted recent copies of The Sun headlines about the heatwave onto windows.

News UK owns The Sun, the Times, and The Sunday Times.

During the record-breaking heat in the UK, one XR activist said they were protesting that News UK publications were printing stories of “people happy in the sun,” “women in bikinis,” and “happy toddlers with ice creams.”

A Metropolitan Police spokesperson told The Epoch Times by email that police were alerted to damage caused to a building by protestors in London Bridge, SE1 and officers attended the scene.

“Five people have subsequently been arrested on suspicion of criminal damage. Officers remain in the area and enquiries into the circumstances continue,” said the spokesperson.

Last year, Metropolitan Police said that more than £50 million ($68 million) had been spent on policing XR protests since 2019.

In 2019, a report (pdf) by Policy Exchange written by former Head of the Metropolitan Police Counter Terrorism Command Richard Walton argued that XR was a campaign that seeks to use mass civil disobedience over climate change, to impose full system change to the democratic order. And that it seeks a “more subversive agenda, one that that is rooted in the political extremism of anarchism, eco-socialism, and radical anti-capitalist environmentalism.”

In response to the report, XR said it was “a movement of mass civil disobedience with the principle of nonviolence at its core.”

“Ordinary people of all ages and backgrounds from across the political spectrum have come together, united in our commitment to ask the government to act urgently in the face of the biggest existential threat our society has ever faced: global heating and ecological collapse,” it added.

Host of Dangerously Reasonable show on Youtube former co-chair of the Green Party (1990–1991) Mallen Baker told The Epoch Times that he believed that XR’s methods were “counterproductive.”

“Extinction Rebellion is one of the things you expect that there will be radical campaign groups or issues like this, of course, many young people are getting absolutely passionate about wanting to change the world and they believe that’s the way to do it,” he said.

“Unfortunately, the way they go about it, and the way that they framed the campaign, makes it highly likely that actually what they do is counterproductive,” said Baker.

He said that in the UK every major political party and business signed up to a net zero target and that activists are “pretending no one is doing anything” while delivering the most “horrific apocalyptic messaging” to young people.

“There are levels of government, where there are people who are doing things there are agencies or environment. There are so many routes that young people can take to be practically part of the solution to have a campaign group telling them that no point doing any of that because you’re doomed. And all you can do is get arrested and ruin your life chances of course because the world isn’t going to end in a couple of years’ time,” said Baker.

“It is incredibly destructive,” he added.

He added that XR says that the Murdoch press doesn’t say anything about climate change, but it does. “Look at what they say. They are not necessarily the best, but they certainly talk about climate change more seriously now than ten years ago. So what’s the point? What are you trying to achieve?” said Baker.

In 2020, XR delayed the distribution of several national newspapers after blocking access to three printing presses owned by Rupert Murdoch.

Protesters targeted Newsprinters presses at Broxbourne in Hertfordshire, Knowsley in Merseyside, and near Motherwell, North Lanarkshire, with titles including the Sun, Times, Sun On Sunday, and Sunday Times, as well as the Daily Telegraph and Sunday Telegraph, the Daily Mail and Mail On Sunday, and the London Evening Standard delayed.

The protest caused newspapers to lose an estimated £1 million ($1.38 million) and the protesters were found guilty. All six defendants, apart from one, were given a conditional discharge for 12 months and ordered to pay £150 ($207) to the court and a £22 ($30) surcharge.

Bronwen Weatherby and Lily Zhou contributed to this report.