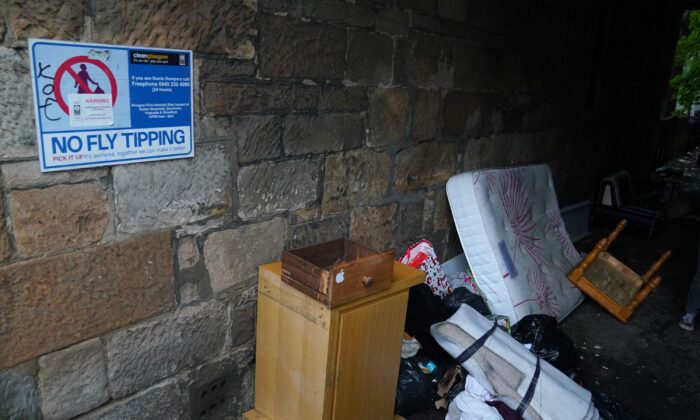 A file photo of rubbish in Glasgow, Scotland, where refuse collectors have gone on strike. (Andrew Milligan/PA)
UK

Bin collectors and street cleaners have gone on strike in the Scottish city of Glasgow, which is hosting the United Nations climate conference, also known as COP26.

The strike began at one minute past midnight on Monday, hours before more than 100 world leaders were set to arrive in Glasgow for a two-day world leaders’ summit, which forms part of the two-week-long U.N. climate conference.

The GMB union said that its members will take strike action throughout the first full week of the COP26 conference.

The planned strike action was previously called off on Friday after a new pay offer from council umbrella body Cosla, and the GMB said it would suspend the strike for two weeks to consult with members.

But the union decided to go ahead with the industrial action after its last-ditch talks with Glasgow City Council collapsed on Sunday evening.

Louise Gilmour, GMB’s Scotland secretary, said the union had negotiated “in good faith” but the council had “refused this massive opportunity to move forward.”

“The agreement struck at national level gave two weeks to consider the pay offer and so there is no reason for this strike to go ahead at this time,” a spokeswoman for the council said on Monday.

Scotland’s Transport and Net Zero Secretary Michael Matheson said that he was disappointed by the strike action.

Talking to the BBC’s “Good Morning Scotland” programme, Matheson said the Scottish government “would certainly want to continue to encourage both Cosla, Glasgow City Council, and the GMB to continue to discuss this issue to try and find a quick resolution.”