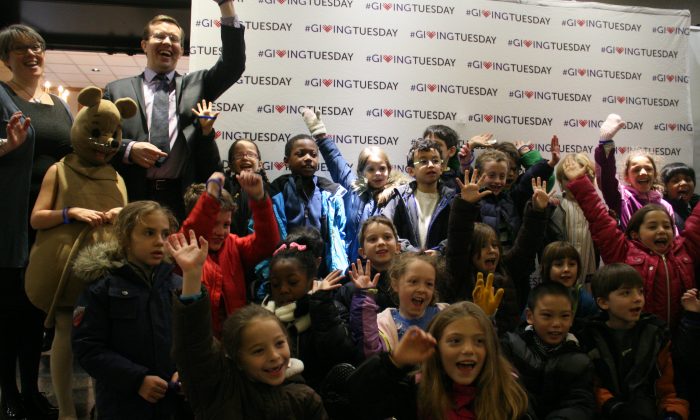 Children cheer in the lobby of 92nd Street Y, a community center on the Upper East Side, Manhattan, N.Y., on Dec. 2, 2014, after attending a musical concert in support of Giving Tuesday. (Shannon Liao/Epoch Times)
New York

After Shopping, New Yorkers Gave Back on #GivingTuesday

NEW YORK—People scrambling to do last minute holiday shopping had the chance to consider leaving some time to visit their favorite charities in the spirit of Giving Tuesday, a newly minted holiday.

Giving Tuesday makes use of social media and real-life blood drives, donation boxes and countless other festivities, across the country and in 28 other participating countries, to celebrate giving.

The day was founded in 2012, by the executive director of the 92nd Street Y (92Y), a community center in the Upper East Side, Henry Timms, in partnership with the United Nations Foundation.

Timms, a towering man who speaks with an English accent, said he observed philanthropy in America and was inspired by the generosity of people. He then wanted to encourage people to give and to show them where they could.

“Giving Tuesday was an experiment in thinking about community in a much bigger way,” said Timms, “And how we can use new technology to bolster communities.”

The day comes on the tails of the popular shopping events Black Friday and Cyber Monday, and fits in nicely along with the holiday theme, according to Timms.

“After Black Friday and Cyber Monday, two days all about getting deals, we launch Giving Tuesday, which is all about giving back,” he said.

A #GivingTuesday happy hour hosted by Dell and the U.N. Foundation, among others, celebrated all day Tuesday, using the hashtag #UNSelfie on social media to promote donations to charities like UNICEF, Girl Scouts, and the Ronald McDonald House.

Donations have gone up 270 percent since Giving Tuesday began, said Timms, citing a BlackBaud online data study. In the United States alone, there are 20,000 organizations participating in Giving Tuesday this year. The day has also won endorsements from the White House, Bill Gates, and Hugh Jackman.

The 92Y community center had many events going on simultaneously on Tuesday. Staff put on a children’s concert and had seniors knitting for cancer patients and others in need. Outside, there was a blood drive.

Sometimes the charity work intersected with holiday shopping. A nonprofit for ending poverty by the year 2030, Global Citizen, hosted a three-hour shopping event at Creeds Collective, a pop-up shop in SoHo. Ten percent of all proceeds went to the nonprofit.

JCPenney is allowing kids of the Boys and Girls Clubs of America, which helps youth stay off the streets, to shop for gifts to give their struggling families. New York City stores are in one of seven participating cities.

All over New York Tuesday people donated and volunteered. The agency Wilhelmina Models set up #UNselfie photo shoots in its New York office, and in two other cities.

NYC Dads Group, a community of over 1,100 dads in the metro area, collaborated with the group Baby Buggy, which aids families in need nationwide. The dads sorted and bundled up clothing to be donated to children helped by the charity.

And in South Street Seaport, the annual tree lighting ceremony was in honor of Giving Tuesday. It featured performances by local artists from New York in diverse genres, and even the Harlem Gospel Choir.

New York City Service’s chief service officer, Paula Gavin, awarded 92Y a proclamation for starting the new tradition and promoting volunteerism. She said that the mayor also wanted to support what 92Y had started as a giving movement.

As philanthropic efforts continue throughout the city, Gavin said, “There are many things happening. We chose to be here because this is where it all began.”