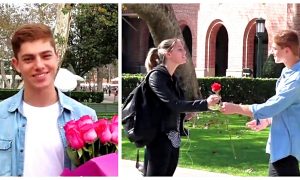 Dad Gets a Corvette He Always Wanted, His Reaction Is Priceless

Relationships between parents and their kids are something that seems to be deteriorating as of late. But that does not mean that it doesn’t still exist. Many parents and kids still have great relationships, years, and even decades, after they have grown up.

This video showcases a wonderful gift that this guys children has bestowed onto him. The video starts out with the man receiving a box, and inside the box is a letter, which his son opens in order to read it aloud. The note mentions how great of a father that he has been, and how he has worked tirelessly to give his children the life they they wanted, even at the sacrifice of what the father himself wanted.

The letter ended with the son saying that since he has sacrificed so much, it was time for them to return the favor. So he told his father that the gift was in the back, and helped him up to take him to the back of the house to see what the gift was.

When he arrived outside, he was shocked to find out that his kids had gotten him a corvette, something that he had always wanted. The man started to cry out of happiness, and gave his children hugs, happy that his children had got him such a nice gift.

This is why parent-child relationships need to be strong. If you raise your children with love and care, and support them even long after they have left the nest, then they are more likely to repay you in kind when the time comes. And nothing feels better than knowing that your kids appreciate you, and love you even as adults. We need more relationships like this in the world.