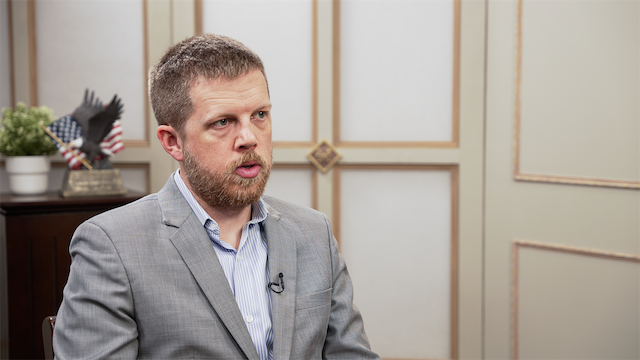 Connor Boyack is the founder of the Libertas Institute and author of the Tuttle Twins children’s books, which have sold 4 million copies. He recently released “America’s History,” a new Tuttle Twins story-based textbook to counter the “superficial history” taught by today’s social studies textbooks.

Boyack’s goal is to empower parents to equip their children with intellectual tools to evaluate ideas: to recognize ideas that are based on truth, on goodness, and that will help society flourish.

Today’s parents need to “give our kids a shield and a sword before we send them out into the intellectual battlefield, give them a foundation of these ideas,” Boyack said in an Aug. 27 interview with EpochTV’s American Thought Leaders program. With that foundation, “when they’re listening to their teacher, or reading a textbook, or looking at TikTok, or wherever they’re consuming information, they can evaluate those ideas, rather than just absorb them like a sponge.”

During the pandemic, remote computer-based learning revealed exactly what children were learning. Many parents began to feel they had placed too much trust in schools and in history textbooks that may not teach students how to properly evaluate and understand historical events.

Boyack wants parents to take the lead in deciding what their children learn, whatever curriculum they decide to use. “For me, this is a mission in engaging parents to wake up and take charge of the education of their children, rather than delegating it to someone else.”

Beyond Names and Dates

“I think we have a generational handicap in a sense, where the schools for so long have been teaching this dumbed down civic illiteracy that they’ve been conveying to kids. And now we have parents who find themselves unable to talk to their kids about it,” said Boyack.

“We’re trying to empower parents directly to do those things, whether their kids are homeschooled, or they’re in these schools that are deficient,” added Boyack.

The story series emphasizes teaching ideas—including freedom, entrepreneurship, money, personal responsibility, and the Golden Rule—instead of simply dates and names. The book also focuses on discussing and connecting past events to the events of today.

Boyack read and researched many of the U.S. history textbooks currently used in schools across America. He realized that many of these textbooks teach history superficially—with dates and names—but fail to give a context for historical events.

“What the books all failed at, in my estimation, was focusing on the ideas of American history, the philosophy, the values, why did these people do what they did?” said Boyack.

‘Those who don’t learn from the past are condemned to repeat it,” is a philosophy that guides Boyack’s work.

“By talking about how it relates to our world today, what we’re trying to do is help [readers] understand the language of history, how to discuss historical events, and how to apply it to their world today and really spark questions.”

The events of history can be used to learn empathy and compassion, instead of casting one group as victims and the other as perpetrators, and centering U.S. history around slavery and oppression, said Boyack, referring to critical race theory-based curriculum such as The New York Times’ 1619 Project.

The 1619 Project centers U.S. history on the arrival of African slaves to America. Its website states, “It [the 1619 project] reveals the hidden truths around our nation’s founding and construction—and the way that legacy of slavery did not end with emancipation but continues to shape contemporary American life.”

The Epoch Times reached out to the creator of the 1619 Project, Nikole Hannah-Jones, for comment.

Students should learn about the colonization of Native Americans and slavery—two very dark chapters of our history. However, that is not where our history started, said Boyack.

“I think we need to frame history in a way not to say here’s what happened, and here’s what to think about it. But instead to say, here’s the history with all of its warts and bumps and bruises, how can we look at what happened in the past to better empower you?” The textbook looks at how the “bumps and bruises” relate to today, and what can be learned from them, he said.

This approach, said Boyack, frames history as “a narrative that serves these kids to say ‘what does it mean for you today?’ and ‘what can we draw from the past that will help us make a better future?'”

Boyack believes there has been a neo-Marxist infiltration in schools, media, and entertainment. Parents must realize this is a battle for their children:

“I believe that we are in a war of ideas. And I believe that any parent who doesn’t recognize that they’re on a battlefield, that their children are ground zero in this effort [is] going to lose. If we don’t know that we’re in the battle, how can we ever win it?”

What parents are seeing today is not a new strategy, Boyack emphasized. Throughout history, totalitarian rulers have recognized they must capture the minds of children and youth to indoctrinate them into Marxist or totalitarian ideology.

“Again, if we understand our history, let’s learn from it. And if we learn from history, that collectivists are trying to co-opt and change the minds of our children, maybe then that can inform what we as parents do today.”

“Many of these people are Marxist; they want to undermine the classical, liberal heritage of America to take us in a more socialist, Marxist direction,” he said.

Marxists want people to disassociate from their country’s history and founders, said Boyack. By contrast, instead of judging those in history or punishing people, the Tuttle Twins series aims to understand, empathize, and learn from history.

“We’re trying to have that nuance to say, ‘they made some mistakes.’ There were some horrible things that happened, to be sure. But also, there was some good as well. And let’s build upon that,” said Boyack.

“Look at someone like Thomas Jefferson, who had a very complicated situation himself with slavery, inherited a lot of slaves, kept a lot of slaves …  yet he himself was ahead of his time because he was privately writing and thinking about this moral evil,” Boyack continued.

He called for compassion to look at historical events in the context of the time and place in which people like Thomas Jefferson lived:

“We can call it evil on its face, but we can at least afford them a measure of grace, to recognize that when they’re brought up in a system like that, and when [there are] all these economic and cultural and religious and other pressures, keeping this type of environment, it’s very hard for someone to act differently when that’s all they’ve known.”

Ultimately, Boyack is convinced that schools will not be the ones to fully empower kids with that “shield and sword.” That role rests with the family.

“I don’t think that’s where we save the country. I think it’s at the dinner table. And for us, we’re trying to empower parents to have significant, robust, deep, meaningful conversations with their kids.”